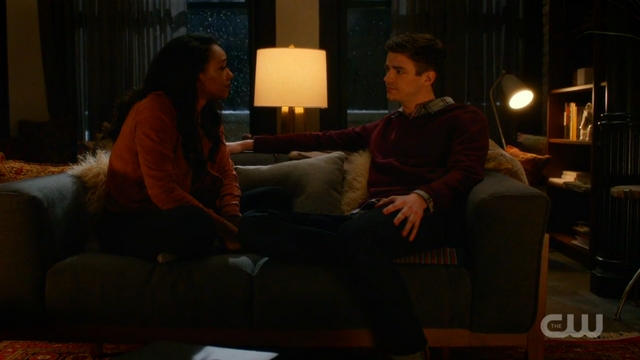 Oh its been a long month Flash fans but back to the spoilers. So our episode opens as Barry (Grant Gustin) deduces that in 2024 Savitar has been defeated by his older self. Before things get moving, Iris (Candice Patton) has a very serious conversation with Mr. Allen. She implores him to watch over detective Joe (Jessie L Martin) should she die. He clearly doesn’t like this conversation. But her death would result in her father being broken. Iris being the altruist she is wants to make sure he’ll be ok.

Meanwhile HR (Tom Cavanagh), Cisco (Carlos Valdes), and Julian (Tom Felton) are in danger by Killer Frost’s (Danielle Panabaker) rampage. Before things get dire our hero tries to defuse things. But she manages to run anyway from the fastest man alive.  Understandably Cisco and Julian are on edge and blame each other for Killer Frost. The arguments are sound considering Caitlin’s life was in danger. 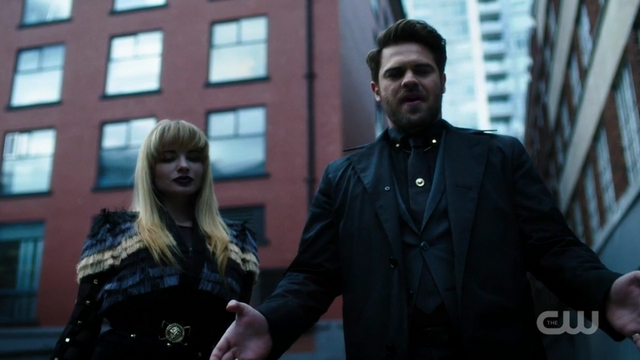 Barry informs the team he plans to head to the future. So how does this get done? Well Barry being the genius that as calculated that he needs Kid Flash’s (Keyinan Londsale) help. Mr Allen has messed with time enough he’s practically an expert. He arrives in the future but he happens to run(hah) into some old friends. Top (Ashley Rickards) and Mirror Master (Grey Damon) are pretty active in 2024. They seem to be stronger than before and as a result he as to runaway. Later, he arrives at his apartment to met Cisco of the future. Mr. Ramon advises him things kinda suck  in the future as he leads him to his olderself.

What we witness is an abandoned Star Labs. After Iris’ death Barry pushed away everyone. As the present BA is slowing taking this in his 2024 self appears. Once he hears it’s regarding Savitar’s identity, he advises the youngster he came for no reason. The reason being is that although he trapped him into the speed force…he doesn’t know his identity. A long trip for nothing. I think that’s something we all can relate with. 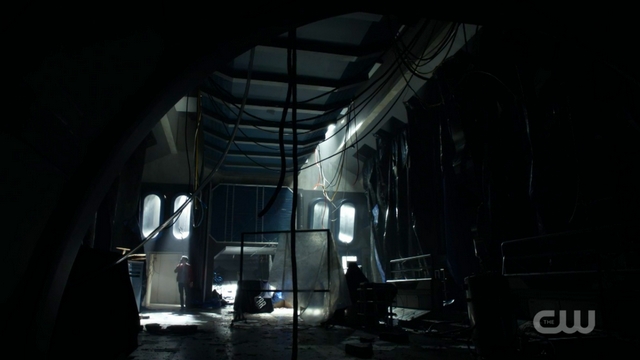 After the subsequent disappointment he gets ready to head back to the past. However he can’t open a portal, which is very weird. All times he’s gone to the past should be like riding a bike. His friend takes the time to mention that another grim issue of the future are his hands. He lost them in a battle with Killer Frost. With no hands, he can’t use any of his powers. With no no answers, he and Cisco visit the team.

The first stop is to visit Julian at Iron Heights. The young BA also meets Killer Frost. He laments the fact that he couldn’t avoid this future for her sake. She dismisses his friendship and shares she had fun with Savitar. Wait what? She actually knows his identity? But she’ll never share. This really shows how far gone Killer Frost is…at least at this point. This was foreshadowed sometime ago. 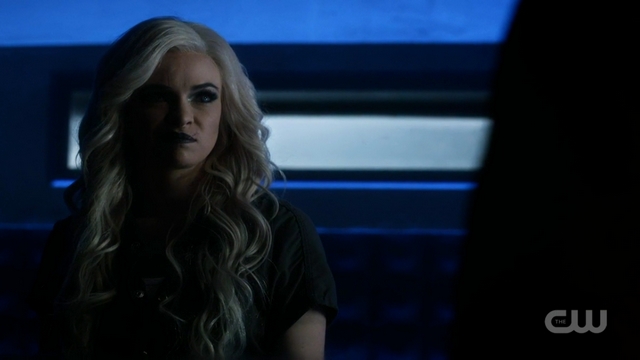 Next we head to the West house to visit Wally. But KF is not who he used to be. The young West is essentially broken. Iris’ death drove him to battle Savitar. This resulted in him getting his spine broken and his mind damaged. As to what he saw fighting Savitar is unknown but the damage was done. His faith is pretty rough to deal with all things considered.

Lastly, we move to a graveyard. We see a solemn scene where an older Joe is tending to Iris’ grave. From a distance Barry asks his father how he is. Joe answers back with “you’re asking now?”. So it appear future Barry didn’t keep Joe close. This is hard to accept because everything were seeing is a complete opposite of what we now. Thus far its been perpetually sad. 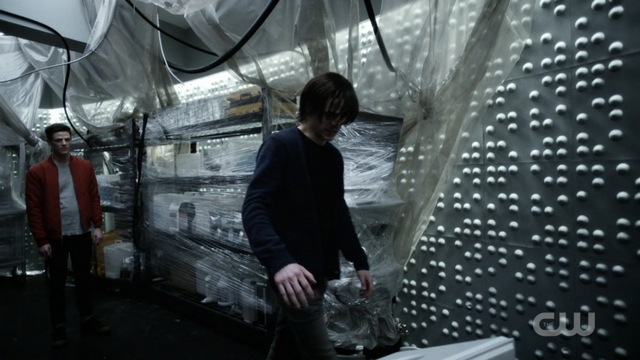 Barry finds his future-self literally in a corner as he confronts him. He demands to know why he abandoned everyone. At this point you really have to sympathize with the older Allen. He tells 2017 BA that he fail at every attempt in saving her life. Her death will completely and utterly crush him. It’ll be so severe that he will ultimately be unable to keep the team together. As he’s telling Barry this he can’t tell him anything or do anything. All he can do is cry knowing that he may become this man. This man that has lost the fire in his life.

This pushes Barry over the limit and he really needs to leave. Cisco guilt-ridden explains that he’s the reason why the young scarlet speedster is stuck. He developed a device that can stop the creating of speedforce portals(cool). When Barry has a chance to leave…he can’t he realizes he can’t be like older Barry. Our Flash isn’t someone that turns his back on people. 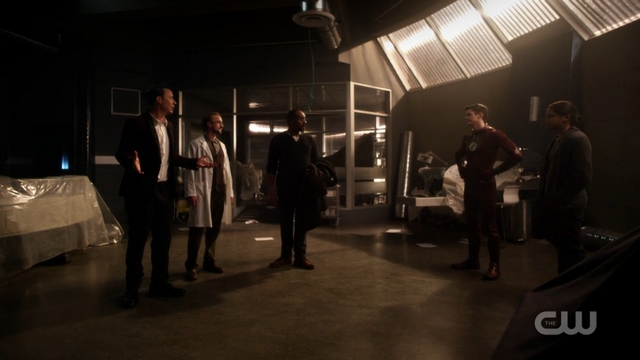 So he promises Cisco to get the team together…including HR. Speaking of HR, he’s doing really well for himself as a writer. So well that his fans are practically throwing themselves at him. Any who Barry does a super-speedy round up of the team. Everyone is pretty confused and even more so as they see a young Mr. Allen. So he admits that he failed them and wishes to mend that. He asks for their help in taking down some metahuman criminals.

Afterwards, Barry shows up to stop Top and Mirror Master after a heist. Now those two aren’t exactly the biggest of threats in the rouge gallery. However they prove to very dangerous as they have Barry essentially pluralized. Working together the two have The Flash experience extreme vertigo and the sense that he’ll be crushed by a building. Yeah they got stronger over the years. Cisco readies a device to render the foes useless but it has to be delivered fast. 2024 Barry offers to help. So then then best comic book part of the episode happens.

At the last second Barry is saved by older Barry. Older Barry is sporting a brighter, lighter looking, and gold trimmed Flash suit. Man when is our Barry getting a new suit? Any who, 2024 Flash was inspired by his younger-self to action. So they both work to capture the power couple. Older BA ends things after jumping through a mirror to defeat Mirror Master.

After the win, the team is glad to be back.  Future Joe and Barry get to heal things by hugging it out. Its a first step for them to get things back on track. 2024 Barry hands him some information that aided in stopping Savitar. Hopefully it can prove useful back in 2017, The Flash informs the other he maybe able to get an advantage on stopping Savitar. 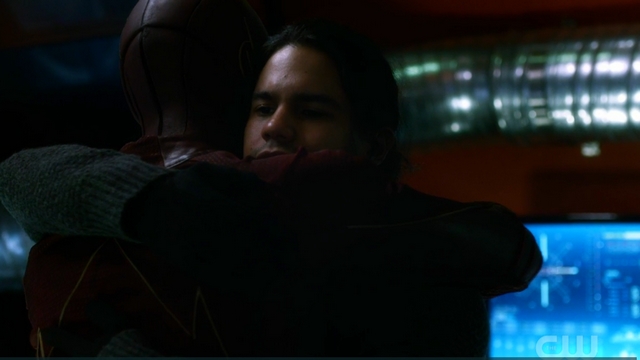 Our episode ends as Killer Frost, on the run, meets Savitar. He offers her help but she doesn’t seem willing at first. Savitar reveals his identity to her and we still remain in the dark.

Our first episode back was a very interesting one. To see Barry an emotionally broken man was new ground. The future offered a stark difference for the present that we know. The best part of the episode is Barry speaking to himself. Seeing yourself giving up on all things is surreal and makes for great drama.

After another brief break this episode was very welcomed. It was more emotionally charged by both Barrys. She a history where The Flash fails in multiple ways offered great dynamics.