The Flash Season 3 Duet Review — Mayhem of the Music Meister

Woah there speed loving friends, spoilers are abound. So apparently, everything is better in song. This is the very theme of our episode 17. So our episode begins as our hero is Barry (Grant Gustin) brooding as he watches Singing in the Rain. Right now, he’s crashing at Cisco’s (Carlos Valdes) because he needs distance from Iris (Candice Patton). Moody Barry is soon he’s summoned to Star Labs due to a breach opening.

Team Flash is then visited by Mon-El, J’onn Jonzz (David Harewood) and a whammied Super Girl (Melissa Benoist).  Apparently, the villain Music Meister (Darren Criss) sort of appeared out of nowhere to attack The Maiden of Might. Her friends brought her to the best help in the known multiverse. Before everyone can wrap their heads around it he pops up in the Speed Lab. Barry and a now little less scared Wallace (Keiynan Lonsdale) participate in a meet and greet. 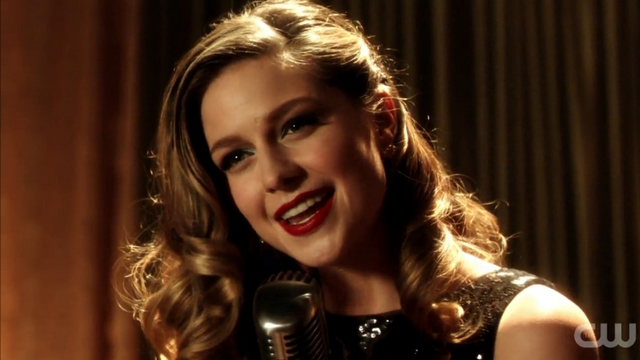 The musical one is not push over, which he displays as he deals with Kid Flash effortlessly. He then easily knocks down Barry and whammies him too! Oh before I forget did I mention that Music Meister happens to know everyone? Like he has spoilers for their secret identities and everything. Afterwards, Mr. Allen awakens in a 1940s club completely confused. Then to his surprise he and the audience listen to a beautiful rendition of Moon River. Sung by none other that then by Kara herself. After superhero that can sing? Cool

In this strange world both singers are under the employ of a gangster. A club owning gangster that happens to look like Malcom Merlin (John Barrowman). They’re also powerless and in danger…sort of. Soon after, the musical mastermind shows up and fills in the blanks. So they are trapped in a musical their minds created. The logic being this world is that both love their musicals. So here we are but in the real world they’re old cold. So they have no choice but to follow the script and go with the flow.

Quick fun fact; this musical was in the making for quite sometime. Also you may be surprised to learn a good number of actors within the DC hero shows are performers. So, yes this episode is a number of actors in their natural element. 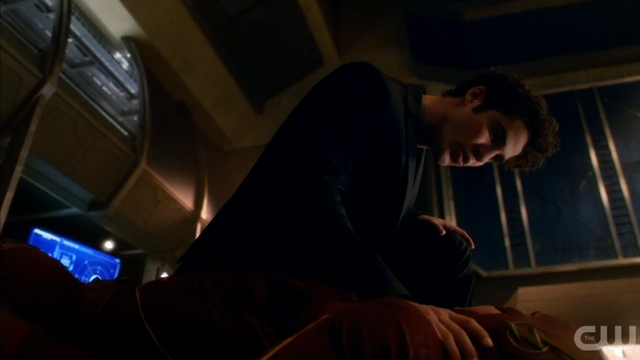 In the outside world , the music focused meta is on a tear across Central City. Both Barry and Kara are losing their powers as he’s stealing them. So KF, Vibe, and the Martian Manhunter make they’re way to stop. On of the best comicbook moments of the episode take place. Its also a fun little crossover of action. The threat he posses also served as a good reason for Wallace to get back into action. Eventually, they stop the musical madman.

In not – La La Land, Barry and Kara find themselves abducted by a rival gang. This isn’t just any old gangsters, its the  criminal version of Dr. Stein (Victor Garber) and Joe West (Jessie L Martin). The not so super duo are essentially recruited to do their dirty work. The gentlemen require their help to find a missing not-Iris. So they have to follow the script to stay alive an all that jazz. Sometime later they find her last noted area of appearance. Thy reach a modest apartment and what they find is not- Mon-El and not-Iris…making out. 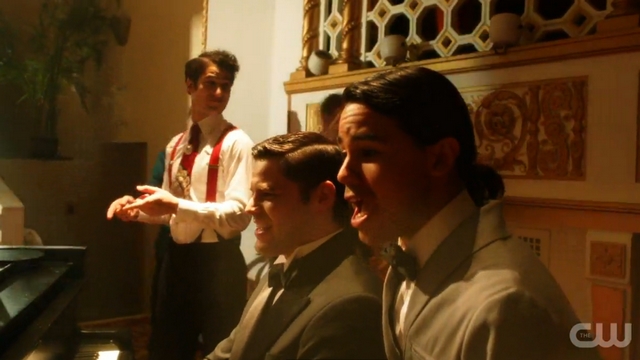 So yeah its weird to see these characters with the faces of their loved ones. The two are in love but have kept it secret from their gangster fathers. With the kidnapping accusations abound, not-Iris and not-Mon El sure aren’t making things easy. So with them being in love BA proposes the obvious. Why not just tell their parents the truth? As soon as the words leave his mouth, they agree completely. Huh…ok.

Back in the real world, the real Mon-El and Iris visit Music Meister in the pipeline. He’s very excited to see them both surprisingly enough. Understandably they demand answers and new to The villain(maybe) advises them that their loved ones are trapped in their minds. He advises further that he is merely helping them…right. As they’re their loved ones, they apparently hold the key to free them. How exactly do they do that is beyond me. 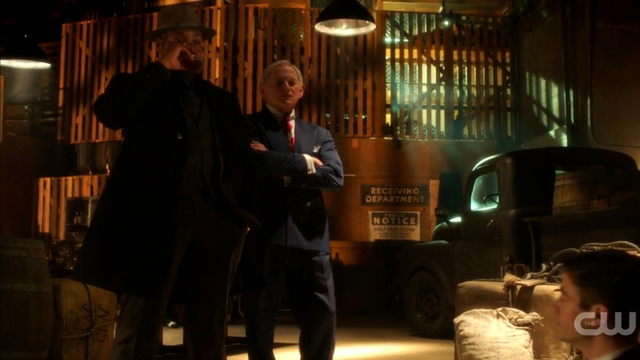 Then back in the musical the lovers tell their respective parents about their relationship. At first the news doesn’t go well. Barry however backs up not- Iris and Kara does the same with not-Mon El. Then the parents break into song. Its a lovely song and it reinforces that Jessie L Martin, Victor Garber and Johnthan Barrowman can sing. They all express that they want nothing more that their kid to be in love. Seemingly things go well and everyone reaches an understanding. However, immediately afterwards both sides plan to go to war. The scarlet speedster and super lady are totally unaware of this.

The highlight of the episode is where both super friends perform a duet. So they perform another original song called…Super Friends. Its great to see Grant and Melissa having fun with this. Correction, its great to see both former Glee stars in their element. Both they getting to sing at the fictional club and then gun fire goes off. 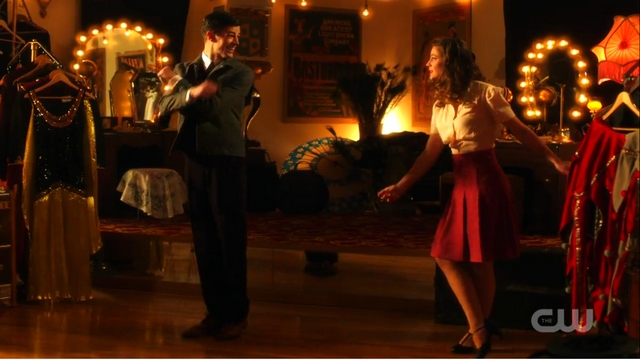 Both gangs have a shoot out outside and everyone gets hurt. Barry and Kara being, the heroes that they are try to stop them. What happens unfortunately is that they both get shot. Sorry I forgot to mention, if they die in this world they die in real life. In Star Labs, the team can see that their dying and are lost at what to do next. So Iris and Mon-El have Cisco vibe them into the heroes’ minds. Ok, didn’t know he could do that.

So with the power of love Barry and Kara are saved. No really it happened just like that friend..well with a kiss. Back in the real world everyone meets Music Meister waiting for their return. Mind you, he escaped the pipeline with no explanation. So the important questions start coming. Why did he do this? Well, apparently he wanted to help them repair their love lives. So we get the sense that he sees all things. But where is he from? That isn’t answered either. Its implied that maybe hes from another plane of existence? Then again there maybe no answer because the episode didn’t bother addressing that. 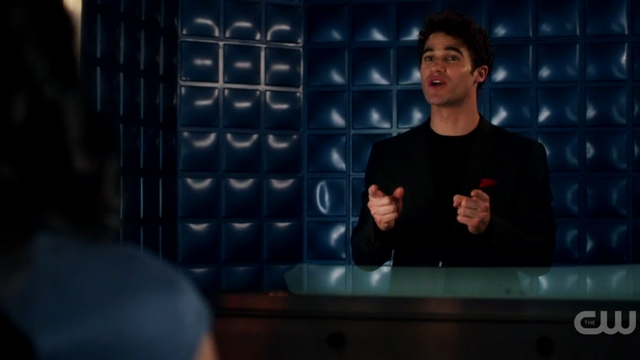 In the end, our episode ends as Barry fixes things with Iris. Returning back to their apartment, he meets Irs with Running Home. Its an original song sung by none other than Grant Gustin himself. The song is beautiful and is the best relationship repair song I’ve ever heard. The episode ends as he formally asks her to marry him and she accepts.

So this was a very fun and not usual episode. Admittedly if you aren’t into musicals you may have hated this episode. Now that aside, this episode plot wise didn’t nothing really. It repaired relationships that were strained for a week. It had a “villain” whom could not be explained. His presence seemed bogged down the episode as well because there was no solid explanations about him. For a show that credits itself for explaining things this seems pretty odd. He was literally just there for song and dance. So this was and wasn’t a good episode. I’m going to remember this as the fun filled Flash Super Girl cross over musical. Also checkout our thoughts on the songs within the episode.

This was a very fun crossover musical to enjoy. The performances and sequences were a treat. As for moving the plot and adding anything of substance? It hits a flat note. It ends up being a forgettable filler episode.