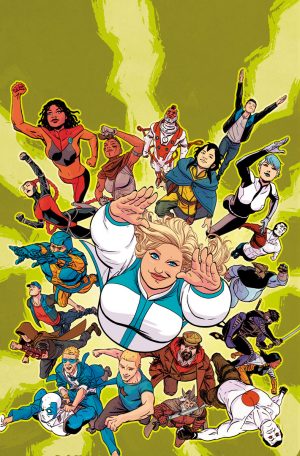 Everyone’s favorite nerdy, high flying, companion field sporting superhero is back, but her new series Faith and the Future Force #1 is unworthy of the superhero and feels more like a late era Steven Moffat Doctor Who episode or The Flash Season 3. In the new comic from Jody Houser, Stephen Segovia, Barry Kitson, and Ulisses Areola, Faith (in her civilian identity as mild mannered copyright friendly equivalent of Buzzfeed writer Summer Smith.) is recruited to save all of reality by the Timewalker, Neela and her dinosaur woman companion, Ank. It’s a half baked riff on Doctor Who complete with an emoji spouting killer robot and a very generic Civil War setting. Segovia and Kitson’s artwork skimps on the faces and focuses on the cool armor and abilities with the help of some energetic colors from Areola so that department isn’t really a redeeming factor.

On the first page, it seems like Houser is going to continue Faith’s story from the Faith ongoing story where she was framed for murder by several of her arch-nemeses. However, with the arrival of Neela, she goes whole hog into the time travel aspects and turns Faith into a Doctor Who/Red Dwarf quote machine and later on, a sacrifice so Neela has a chance to feel bad and screw with time. It’s a testament to Houser that the pop culture references still feel authentic and are sometimes funny. I mean who wouldn’t shout “Allons-y!” if you ended up hurtling down the timestream for some reason or another. On the other hand, Neela and Ank just feel like plot movers and not people although this might owe to the fact that I never read Ivar Timewalker.  Segovia and Kitson give Neela sleek armor and Ank a realistic body type even though she’s some kind of dinosaur/human fusion.

These victories on the design front don’t carry onto their sometimes unbearable personalities. Neela has specially recruited Faith to save all of human history (Houser is playing the mystery angle and not revealing the reasoning she is recruiting modern day superheroes.) and then insults her the whole trip until the fighting starts. It seems like Neela and Ank are just there to give Faith an excuse to taunt robots with sci-fi references instead of being co-protagonists or interesting character studies. The issue does end with some familiar faces from another great Valiant book popping up so maybe they’ll bring the personality and characterization even if Stephen Segovia and Barry Kitson don’t have the artistic talent of Darick Robertson.

The art in Faith and the Future Force #1 is pretty middle-of-the road superhero house style with some flashes of brilliance from colorist Ulisses Arreola when she does something heroic after reading a preview of a new comic.  There’s lots of whites and yellows when she’s using her powers in battle, and Faith actually lives up to her codename: Zephyr. Stephen Segovia and Barry Kitson definitely fare better with the action poses and flying than the civilian scenes, which is sad because the “real world” scenes where Faith chatted, played tabletop games, and even revealed her identities to her co-workers were at the cover of Faith. She has her psiot-buddies next issue, but Faith’s personal arc explored in both the miniseries and ongoing series bearing her name get put on the backburner for time traveling shenanigans and cheap thrills. She’s a pop culture reference spouter, who happens to be plus sized and a superhero in this book.

In Faith and the Future Force #1, Jody Houser, Stephen Segovia, Barry Kitson, and Ulisses Arreola hope that adding time travel and a bunch of guest stars from other Valiant books can cover for a lack of character development, a good villain, and below average artwork. The soft lines and dreamlike compositions of Joe Eisma and Marguerite Sauvage are sorely missed. Also, the comic indulges in time travel cliches that recent films, like Edge of Tomorrow, X-Men: Days of Future Past, and hell, even the “Impossible Astronaut” episode of Doctor Who handled much better.

Overall Rating: 4 (out of 7)- Faith still has a lot of heart, but being thrown into a subpar time travel story with an obvious twist and awkward team-up isn’t a good look for her.