2013 has come and gone, and for me it was quite an entertaining year. A year that bought me many laughs, many frowns, a few smiles and a couple of tears. Over the course of the year, I saw great (and not so great) movies, read some fun books and of course lost some of my favorite TV shows. But as in every year, one medium dominated my interest and time, which was gaming. I played everything from way too many hours of Candy Crush Saga to the surprise release of NES Remix. More personally, 2013 was a breakthrough year for me as a gamer. I realized what really excels a game beyond something I like to something I love. I hope this comes across as I countdown my personal favorite 7 games from 2013.

7) Payday 2 – I will be honest, this is the roughest game on my list, but it works around its roughness for the most part. This co-op heist game is just a joy to play with friends. Planning out your mission, scrapping that all because someone accidentally triggered an alarm or weren’t doing their job and creating an escape plan on the fly while shooting your way out. It’s a ton of chaotic fun that hasn’t gotten old yet.

6) LEGO City Undercover – In a year with GTA V and Saints Row IV, it was LEGO City Undercover that really did something special with open-world games for me. It just went with the insanity and kept ramping it up. You start the game as a disgraced cop who by the end of it is fighting in space in one amazing homage after another. The combat system is fairly simple, and in some ways not needed, but speaks to the nature of open-world combat in general. The game has an insane sense of style, humor and craziness that just meshes into a great package. What other game this year has you rampaging through downtown on the back of a giant T-Rex! 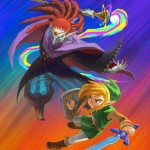 5) The Legend of Zelda: A Link Between Worlds – The Legend of Zelda has had a spotty track-record on handhelds in the last few years, but taking a page from the past (pun intended), Nintendo decided to revisit the Legend of Zelda: A Link To the Past formula with some new twists and wrinkles. What you get is one of the most enjoyable and fresh Zelda games in some time. It isn’t higher on my list because I do feel like the lack of difficulty progression and puzzle complexion does hurt the overall experience, but still great fun. Amazing twists and turns along the way, and a painting mechanic that has you thinking in a whole new way.

The Legend of Zelda: A Link Between Worlds shows us you can teach an old dog new tricks and make those tricks exciting and fun for old and newcomers. 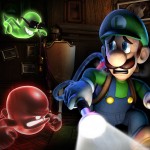 4) Luigi’s Mansion: Dark Moon – This is where the list kind of transitions to those oh so fun nebulous terms of gaming “charm” and “personality!” But Luigi’s Mansion 2 oozes charm and personality throughout the game. This game was crafted with love and it shows. From the little things like Luigi’s ringtone being a remix of the main theme, to the fact that he whistles the theme when nervous to the fun and playful ghosts and the interesting boss and ghost encounters. The gameplay is completely refined and adds a level of complexity that was lacking in the original, tons more content and a fun, if not throwaway multiplayer mode adds to the overall package.

A haunting (Yes, I went there) good time from start to finish. Luigi may not be the bravest hero in the world, but he sure excels at being the most frightened! 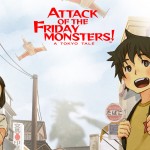 3) Attack of the Friday Monsters – This is a tough one for me, in general I’m not huge on games that are light on gameplay, but this game was just so smart about it. Walking the tightest of tight ropes as it tried to create a world through a child’s eye while at the same time approaching it with an adult sensibility isn’t an easy task, but this game pulls it off. It never feels like it’s talking down to its characters or about them, and it does create a compelling mystery that does drive you to want to see how it unfolds.

The gameplay side of it is okay, if not limited. It’s a basic Rock-paper-scissors card game that really does have a ton of random luck associated with it, but in a cute touch you get the ability to “control” your defeated foe and have them randomly fall down. Why? Who knows! But it is a ton of fun to see and do!

The game’s greatest accomplishment to me though is that it makes me nostalgic for a time and culture I’ve never been a part of, but it builds such an interesting world in this tiny village that you yearn for these simpler days! And giant monster attacks. 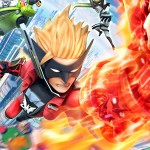 2) The Wonderful 101 – There’s a lot to say about the Wonderful 101, but really what you need to know is it is one of the most insane, over-the-top, in your face action games in quite some time and it is terrific for it. This game embraces its concept.

It all starts with one of the most unique and engaging battle systems in recent memory. A mash-up of a character-action game and an RTS that has you control your numbers to best utilize the tools and combos at your disposable. A team of more than half-a-dozen heroes with distinct and fun personalities backed by dozens (totaling 100!) heroes to join the fray anything from Santa Claus to a pirate!

Then it throws it all into a blender to churn out the closest thing to a Saturday morning cartoon we have on the market with fantastic and just over-the-top enough voice acting to not be grating. Fantastic villains and interesting heroes. A morphing sequence and giant robot battles!

The Wonderful 101 may not be for everyone, but it is a damn fine game! 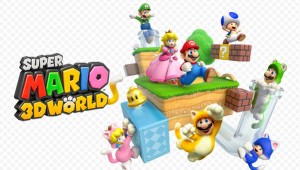 1) Super Mario 3D World – At times, he makes it seem easy and we could take that for granted. Doing some quick mental math, I believe a 3D Mario game has been my GoTY 4 of the last 7 years, but for good reasons. They continue to be fantastic games from top to bottom.

This game like the Galaxy games and 3D Land before it, has more variety on display in 10 minutes than some entire franchises. You’re racing down a Mario Kart stage, you’re exploring an ancient Japanese home, you’re jumping to the beat of the music, you’re capturing stars with Captain Toad and you’re flying high at a circus. The game introduces and drops concepts as a rapid pace which means you’re always on your toes to see what it throws at you next.

It’s combined with one of the best gaming soundtracks in recent memory going with a more jazz-feel than recent games in the series. The introduction of multiple characters who play differently also opens up a bit of fun in just how you control and approach levels.

A minor point, but the game also makes great use of Miiverse finally making the “social” part of the console feel alive without spoiling the game or feeling overwhelming or grating.

But what really pushes this game over the top for me, is the little moments that I always feel make the great games amazing. Finding 4 Chargin’ Chucks huddled on a beach because they are athletes, seeing Goombas relaxing by a pool because its their vacation, the little melody that plays when you rescue a Fairy, the Toad who is afraid of Bowser’s shadow, being able to blow into the mic and knock little Goombas off the stage, and dozen more throughout the game. It shows the love and care that went into crafting this title.

Super Mario 3D World shows that Mario doesn’t need the “epic” scale of the Galaxy games to be fantastic. From beginning to end to other end, you won’t find a better game on the market this year!