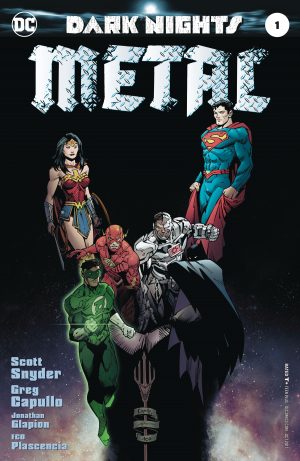 Dark Nights Metal #1 isn’t just the triumphant reunion of the greatest Batman creative team of all time, writer Scott Snyder and penciler Greg Capullo with inker Jonathan Glapion and colorist FCO Plascencia, but it mines the richness of the DC Universe to tell a battle of good against evil that spans multiverses. This whole thing with Nth metal was mere prologue as the former Hawkgirl, current Lady Blackhawk Kendra Saunders explains to the Justice League at Blackhawk Island, and a vision of the ancient demon Barbatos, an ancestor of Bruce Wayne from Grant Morrison’s Batman run; a league of evil badass Batmen, and a final page to end all final pages makes Metal #1 one hell of a ride. Sometimes it feels like

Instead of boring us with exposition, Snyder and Capullo kick Metal #1 off with a big, coordinated action sequence as the Justice League wearing gladiator armor coated with their vulnerabilities are the prisoners of Mongul on his new War Moon. Capullo and Glapion draw the Justice League with glee although Batman steals the spotlight mostly with Wonder Woman barking out formations as it seems that they have been stuck on this planet for quite some time. Plascencia uses black in a timely fashion to show Batman struggle with foes way out of his league and use his cunning and a little bit of luck to figure out to beat these evil Latin named mechas and take us back to the main event. However, the cold open is like a mouthwatering appetizer that leaves you ready for even more epic battles to come once the threat from the Dark Multiverse and whatever surprises Chef Snyder have cooked up for us appear in later issues.

Dark Nights Metal is Scott Snyder’s opportunity to tell a DC Universe epic in the vein of Grant Morrison’s Final Crisis, Geoff Johns’ Blackest Night, or Marv Wolfman’s Crisis on Infinite Earths albeit Nth Metal, not a “crisis” or “red skies, being his MacGuffin. I like how he and Capullo bring some second tier characters into play, like the Challengers of the Unknown and Hawkman, who isn’t alive on panel, but Dark Nights Metal #1 and its prequels Forge and Dark Days were the first time I’ve ever cared about the character. Carter Hall is like Indiana Jones meets Sherlock Holmes with the ability to fly and a badass mace, and hopefully, we get to see Capullo’s take on him in the 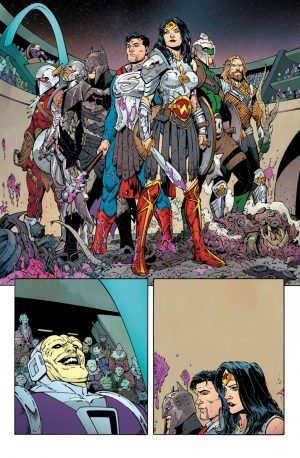 flesh as the series progresses. Plascencia does adds a nice golden sheen to his statue on Blackhawk Island, and the sense that he has a heroic legacy continues the linewide theme of the DC Rebirth universe feeling more lived in and characters had well-developed relationships than the New 52 where everyone, including Superman and excepting Batman and maybe Hal Jordan, seemed younger, edgier, and was constantly either at each other’s throat or jumping into quick, romantic relationships.

The middle section of Dark Nights Metals is more than a little exposition packed, but Snyder adds some humor and self-awareness to his script like having Superman constantly telling various characters to stop being cryptic and accidentally giving a plot summary of Grant Morrison’s The Return of Bruce Wayne or Wonder Woman’s reaction to Kendra’s tales of the Dark Multiverse being “It looks like the back of a map.” This kind of uneasy quipping in the face of the apocalypse shows just how unprepared the Justice League sans Batman is for the events to come in Metal. And Batman (and fans everywhere) get a nice surprise in the Batcave in a series of pages that is paced just right and uses the familiar (The bookcase that leads to the Batcave, a ticking clock.) to introduce the unfamiliar. (That final page twist.)

In Dark Nights Metal #1, Scott Snyder and Greg Capullo revisit themes that appeared in their legendary Batman run like Batman not trusting his allies and blow it up on a universal scale while starting to dust off a place for their own take on a classic DC “Crisis” with no Anti-Monitors in sight. Also, evil Batman legion and a twisted multiverse are just plain fun ideas to base a big event story on.

Overall: 7 (out of 7)- Scott Snyder and Greg Capullo getting the band back together and telling a Crisis-type story is the perfect recipe for some epic comics. Metal #1 features one of the coolest final pages you will read in comics in this year.