Today, DC Comics and Boom announced a new mini-series featuring the Justice League and Power Rangers debuting in Jan. You can read about that anywhere so won’t bother rehashing the PR, but in just the hour since it’s been announced my mind has been swirling with all types of moments and fights I’d love to see in this crossover. 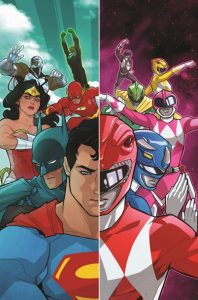 Like any kid of the 80s, Power Rangers were my jam… and this news (coupled with the movie) just has my mind racing with possibilities so below I present to you 7 Things I Wanna See!

1. The Justice League vs Putty Patrol – I just want to see this because on paper, it is the most one-sided fight affair. I mean the Rangers can usually handle them without incident in their normal street ware, imagine a team of veteran super-powered beings going against them? 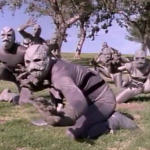 2. Scorpina vs Wonder Woman – Speaking of fights, most people remember Goldar as Rita’s number one general and Squatt and Baboo as her bubbling soldiers, but Scorpina was just as capable a fighter as Goldar, and honestly wasn’t used as much so didn’t get her ass kicked as often. And just imagine how epic a fight between one of DC’s best warriors and Rita’s strongest general would be! 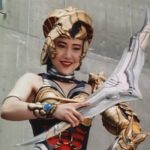 3. Billy, Cyborg and Alpha 5 – An element of Cyborg that they seemingly drop is that he is still relatively young in comparison to the rest of the League, and would love to see him geek out with Billy about their tech and of course their kind of neurotic robot assistant, Alpha 5. Imagine them in the Command Center as they drop some random tech jargon as they power up the Megazord for the final battle!

4. Giant Starro – The header is more of a catch-all, we know that the Rangers and League will team-up against giant monsters. It’s the Power Rangers way, but imagine Rita using her magic wand to increase the size of some of the League’s most formidable foes. Giant Starro. Giant Legion of Doom. Giant Despero. Giant Mongol. You get the idea! 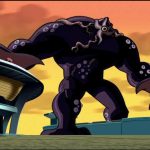 5. Morphing Sequences – Superheroes are really protective of their secret identities except when it comes to crossover. I guess they know may never see these people again so I’d love nothing more than a several page (yes it needs to be gratuitous) of our heroes “morphing” from their civilian guises into their superhero ware. So Power Rangers morphing, Superman doing his shirt rip, Wonder Woman with her spin, GL with his ring and the list goes on.

6. Weekend at Ernie’s – I want the kick ass action, I want the big battles, I want the morphing, but I also want those quiet moments, and it would be great seeing the Leaguers hanging out at Ernie’s Juice Bar with the Rangers perhaps near the end of the series as they wrap things up. 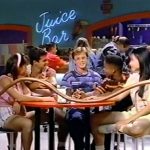 7. Justice League Megazord – We have had a taste of this in Justice League Unlimited and in some ways during the initial Superman/Batman Public Enemies arc with the Composite SuperBatman robot. But I’m hoping that the Justice League gets to pilot their own Megazord alongside the Power Rangers. Like some may argue that most League members would be depowered using a giant mech, but don’t listen to them. They don’t know what fun is! 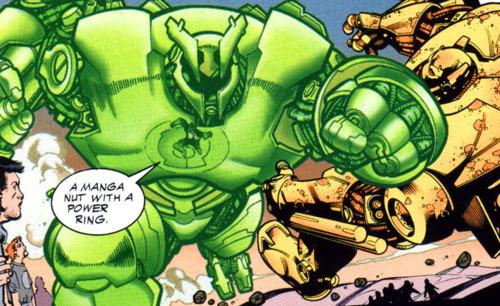