“Fight Club 2” twists, “Vampirella” takes a trip to the past, and “X-O Manowar” tries to prevent a war – all in this week’s reviews from Dark Horse, Dynamite, and Valiant Comics. 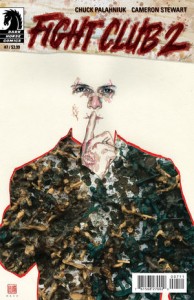 I knew this would happen. This is the point where the story appears to squat on the floor while the next issue looks like it will unleash a mess over everything good that the previous issues have tried to produce. It’s hard to say what occurs without going into spoiler territory but let’s just say those flashes of the fourth wall breaking in the preceding installments seem to be intentional. Don’t forget: his name is Robert Paulson. Sebastian may not be able to trust anyone (not even himself) but at least we can always rely on Cameron Stewart’s competent art. 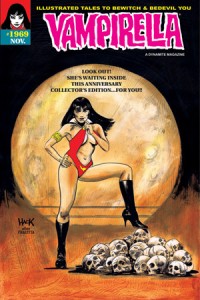 Celebrating Vampi’s 1969 debut, Dynamite has rolled out an anniversary issue with a collection of talent including Nancy A. Collins, current writer for the ongoing series. Rooting itself in those final days of the 60s, these tales range from Vampi taking on a much darker version of Charles Manson to Southern racist werewolves. The art and ideas in here are interesting but their executions needed a bit more polishing. 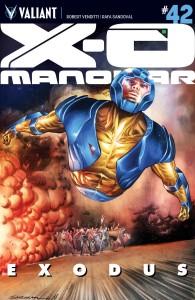 Sanaa tries to keep the Vine High Priest from bleeding out while Aric must figure out a way to keep 2 species (with very good reasons) from killing each other. With all out war looming and a refugee situation it’s hard not to see parallels with the current global political situation. This is not the most explosive installment in the “Exodus” but Venditti seamlessly wraps up his tale while setting up the next arc.