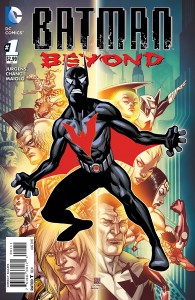 If you’re like me and a bit out of the loop on the DC side of things (“Convergence? Dang it, I still haven’t read Flashpoint!”) you may be a bit surprised to hear Terry McGinnis, the futuristic Batman of his own animated series, isn’t the one inside of the black and red suit. Following the events of “Futures End”, (HERE THERE BE SPOILERS!!!) this Batman title sees former Robin Tim Drake donning the high-tech cowl after Terry’s demise and Neo-Gotham as seemingly the last city standing after the advanced AI Brother Eye has destroyed the world. Essentially, it’s “Batman Beyond” meets (insert your favorite sci-fi dystopian work here). 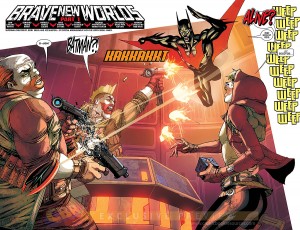 As someone who hadn’t followed “Futures End” I was a bit lost, but the book spends ample time dropping information without becoming an exposition dump. However, I would have preferred a simple summary on the inside cover so this introductory issue could have really kicked off. That’s not to say there isn’t any action – Tim Drake Beyond faces off against some Jokerz and a shocking foe.

I’ll admit it – I was disappointed to learn Terry wasn’t going to be gliding around cyberpunk Gotham with old man Bruce griping in his ear. The team of Tim and Alfred at play here just doesn’t have the same weight. Then again, there have been a number of unsuccessful “Batman Beyond” runs so perhaps DC wants to try something new. I can’t fault a title because of my own expectations and being completely ignorant of recent storylines. However, I can fault it for not being very interesting. The creative team put in some nice work (Maiolo gives a rust-like hue to this apocalyptic world) but this Terminator-esque tale of heroes battling a Borg-like entity didn’t grab me. I don’t think I’ll be reading anymore of Days of Future Past Batman.

5 (out of 7) – “Batman Beyond” may upset those expecting a return to the world of the eponymous animated series by leaning too hard on it’s “Futures End” predecessor. However, it gives Bat-fans a chance to see Tim Drake in a new suit and in a new era. Bottom line: it’s not that schway.