DC Rebirth has been many things, but one of the best things it has been is the return of humanity to many of their costumed characters, which was really highlighted in two books this week. But were they good reads? 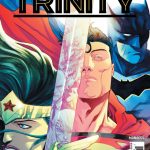 While we’ve seen the Trinity together since Rebirth, their relationship has yet to be fully defined. Hence, the focus on the first issue is a dinner date between Clark, Bruce and Diana.

The highlight of this awkwardness really is the relationship/rivalry between Diana and Lois because I’d forgotten that Superman and Wonder Woman was a thing, but those lingering feelings are quickly brushed aside, and I am grateful for now that the Superman/Wonder Woman romance is dead.

Then there was Clark highlighting a tale of Batman’s rainbow attire… Bruce does have quite the skeletons in his closet whether on this Earth or another.

If you haven’t figured it out yet, the issue is very lite on actual action, but makes up for it with some fun character moments and really moving us onto the next phase of the Trinity’s relationship without much conflict.

I’ve been a HUGE fan of Francis’ art since his days on The Flash book, and in that time he has only gotten better. His color usage remains a real delight in the medium. Light, but so full of life and energy.

But what stood out to me was the emblem introductions that the Trinity got. A great way to frame pages and introduce these icon characters.

Review 6 (Out of 7) – A light on action issue, but some fun character moments and beautiful art carries it. 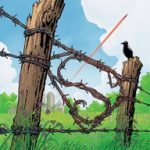 Superman and his family been through a great ordeal while living in secret as the Whites, and Clark decides its finally time to start embrace his new homeworld as his homeworld so we’re off to the State Fair!

I’ve been a huge fan of the Clark, Jon and Lois dynamic, I know family scares off people in the comic industry but because it’s something we don’t see often the book has just been refreshing. Getting to see Clark put down (or hand over) the cape for a day of pigging out, Carnival games and rollercoasters is a delight. That of course doesn’t mean he doesn’t get into some trouble, but the book wisely chooses not to focus on that element instead giving us an amazing visual gag near the end.

The art is solid, and I just found the facials that Jon made in his hat and glasses to be so adorable. Really do capture the joy of a kid so damn well.

Review 7 (Out of 7) – Just a joy to read from page 1 (Look for those Justice League cameos) until the final gag! 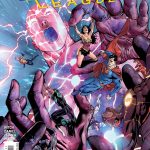 The first arc of Justice League is complete… and it was a complete dud.

The Justice League is DC’s benchmark team, and their book in some ways should represent the cream of the crop of the DC Universe. I got none of that reading the Extinction Machine, there was no sense of scale or scope or action in this entire arc.

This issue specifically was written so on-the-nose, I began to wonder if the writing was even trying. There’s literally a point where Batman is like “Normally, this is where one of us pulls something amazing and unexpected out of our collective assets…” and surprise, surprise Superman just happen to emerge out of the Earth’s core with just the thing needed to turn the tide of battle.

The threat is large, I’ll give them that, but it never feels threatening. I guess what happens when the big bads of the arc are literally all standing around in a circle doing nothing for the most part. And the issue ends just as awkwardly. I just left the entire thing unsatisfied!

The art is solid. And this isn’t a knock on the artist, I guess more on the writing, we learn that a bunch of the enemies have taken on Cyborg’s appearance in the last issue as the BIG twist, and it’s mentioned here, but like never actually shown again. What was the point of introducing it, if wasn’t gonna do something fun and crazy with it to close out the arc?

Review 3 (out of 7) – It’s not a bad comic, it just leaves you feeling empty inside.