The graphic novel World War Kaiju (Book One: The Cold War Years) imagines an alternate history in which World War II was ended not by a nuclear bomb, but by an enormous fire-breathing monster. In the 1940s, man discovered giant crystals buried underground and beneath the sea that, after a little scientific meddling, are proven to yield destructive beasts referred to as kaiju. Soon after the U.S. hatches a Godzilla-like kaiju and unleashes it upon Japan, other world powers dig up crystals to produce kaiju of their own.

The narrative, which takes place in the midst of the Cold War, is framed by a discussion between ex-CIA agent Hampton and upstart journalist Keegan, whose investigatory work calls to mind the classic film All the President’s Men. Hampton was involved in a top secret government project involving kaiju, and wants to give Keegan just enough information to piece the whole story together for himself so that he can expose a potentially devastating conspiracy. During his investigation, Keegan learns the truth about the Roswell UFO crash (one of the book’s more humorous sequences), Carl Sagan’s secret involvement in shadow conspiracies, and more.

Most of the graphic novel focuses on Keegan and Hampton’s conversation, and while the dialogue is generally witty, there is a lot of it. Its coarse “tough guy” nature can be occasionally off-putting, but it is refreshing to see a kaiju-themed story that is clearly written for adults. The writers have a lot of fun tweaking history, with scenes such as Dwight Eisenhower being strong-armed by an insect kaiju’s tiny twin representatives being especially clever. The book is dense with information about its alternate world, with a significant portion at the end devoted to describing kaiju biology and characteristics. 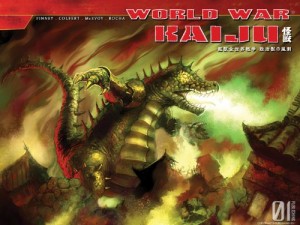 Much of the book’s plentiful subversive humor targets genre tropes intrinsic to classic science fiction films, and it is always interesting to see how a reference will ultimately play out. A good example of this is the kaiju Mogdrah, who is clearly modeled after Godzilla’s goody-two-shoes rival, Mothra. In World War Kaiju’s twisted history, Mogdrah is widely believed to be an altruistic martyr who died to protect the planet, despite the fact that she leveled cities and cocooned herself around the United Nations’ headquarters, holding it hostage in an effort to stop humans from using kaiju as political tools.

Patrick McEvoy’s art is very detailed, and his kaiju designs perfectly represent the 1960s-era archetypical monsters that inspired them. I particularly enjoyed the design for the Red Armadillo – a kaiju developed by the Soviets that is painted red and adorned with prosthetic spikes, paying homage to spiny-shelled Anguirus from the Godzilla series. Scenes depicting actual monster action are surprisingly sparse in this book, but are always eye-popping when they occur. My biggest complaint is that most of Book One feels like a teaser for the real action, and I look forward to seeing the inevitable monster battles to come.

Kaiju fans would do well to pick up World War Kaiju. It offers a clever twist on Cold War history (the idea of a monster named Proletaridactyl should make anyone smile) and is absolutely filled with references to classic monster cinema. The writers’ devotion to intricate world-building is laudable, and their adoration of monster movies is quite apparent. Those unfamiliar with the material being referenced and parodied might find the pacing to be a little on the slow side, but anyone looking for a unique kaiju story will find this to be a fun read and a promising start for the series.

Rating: 5 (out of 7) – World War Kaiju is a reference-filled, often humorous Cold War tale that is sure to please kaiju fanatics.