In its quarter century issue, WicDiv has its “Winter is coming”/ice zombie moment towards the end when the squabbling members of the Pantheon suddenly realize that they have bigger problems than leaked footage of their behavior, especially Persephone’s murder and cover up of Ananke. There is no time for internal drama when you’re facing a possibly omnipotent external foe. Also, icing Ananke might have been a terrible idea as the Pantheon is in turmoil without her, but hey, she was going to sacrifice a kid. Yes, basically everyone in this comic is a terrible person who thinks they are less horrible, and writer Kieron Gillen has the characters hoist themselves on their own petards many times in this comic while Jamie McKelvie and Matthew Wilson get super dark with their art and colors, especially any time Persephone uses her ability.

Gillen, McKelvie, and Wilson keep the increasingly futile battle between Persephone and Laura, the Destroyer and the fangirl at the forefront of WicDiv #25 as her arc has been the most important part of “Imperial Phase”. The first part of the issue is her sparring and blackmailing back and forth with Woden while Urdr is the responsible adult and tries to be reasonable even though she’s as mad as hell. Apparently, reasonable for Persephone includes giving Woden a little taste of his own medicine and transporting him to the Underground where everything goes pitch black in kind of a twisted version of the transformation from human to god we’ve seen in previous issues. McKelvie continues to draw Persephone’s abilities as unnatural and destructive compared to the standard fantasy/superhero energy bolts of the other Pantheon members. The tendrils she uses to squash Woden into submission give me the creeps, especially with purple screenprint colors from Wilson.

Beneath the bolts of power and blackmailing, Gillen has honed in on a couple key relationships in Persephone’s life, namely, with Urdr and Baal. There is still a lot of the hard truth-telling Cassandra in Urdr as evidenced by her blunt texts to Persephone about how many lives she’s willing to fall into harm’s way to get what she wants. There is no dialogue or captions when Persephone looks at Urdr’s texts, and McKelvie softens her face and does a close-up of her eyes and freckles revealing there might be a little bit of “Laura Fangirl” left in Persephone even after she bent Woden to her will. (Thank the Pantheon that the Valkyries are finally free agents though.) 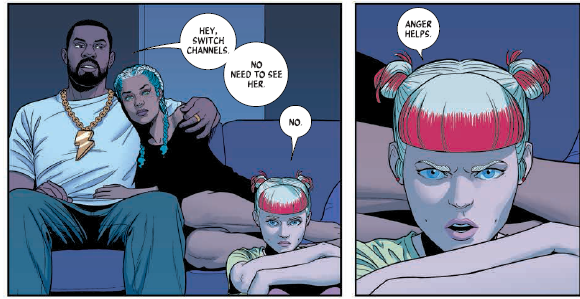 Even though WicDiv #25 features a fall off the couch and yell on Twitter kind of cliffhanger and some intense Underground battling (No appearances from Morrigan or Baphomet sadly.), its most powerful scene is Baal, Persephone, and Minerva just chilling on the couch in a rare moment of domestic tranquility. Sure, there’s plenty of Minerva venting her anger about Ananke and the members of the Pantheon that were totally cool with turning a blind eye to a sacrifice, but there’s also Baal making toast with his lightning powers and McKelvie drawing Persephone with her hair back in braids. And he shows Baal doing that little arm cuddle reach around like they’re on a movie date or something or not about to face a mysterious, possibly unbeatable darkness. The scene is a small glimpse of the Pantheon’s humanity, and how they are human and just want to be loved. But then explosions and Wilson’s wild, pop art colors happen like when anything terrible occurs in WicDiv.

The showdown between Persephone and Woden with Urdr acting as the beleaguered line judge comes to an uneasy truce with Woden coming off as just as much as a fuckboy as usual despite “freeing” the Valkyries. But Kieron Gillen, Jamie McKelvie, and Matthew Wilson also take time to show these powerful gods’ mortality and uncertainty about death in WicDiv #25, and those pages plus crazy cliffhanger are what will stick with me moving forward.