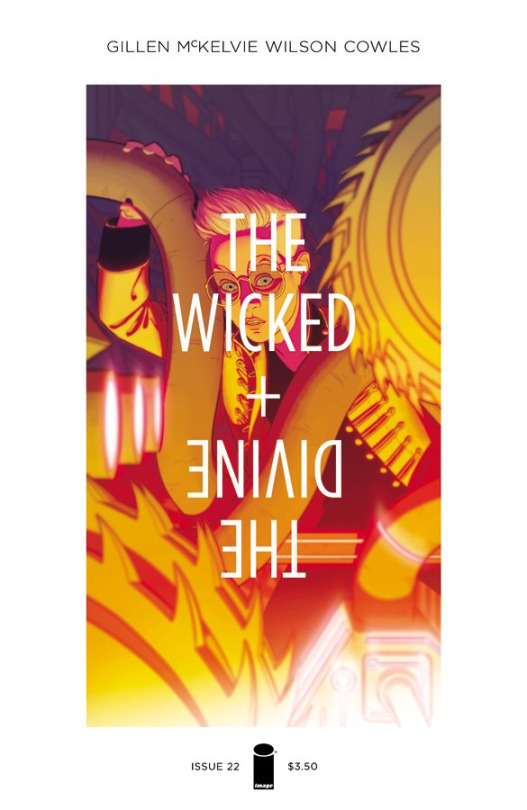 In WicDiv #22, writer Kieron Gillen, artist Jamie McKelvie, and colorist Matthew Wilson pull the proverbial spine of the series through its nose, both literally and metaphorically. Like most final issues in WicDiv arcs, WicDiv #22 is a bloodbath, but beyond mere character deaths and injuries, Gillen closes the door on over two years of plotting and gives the remaining members of the Pantheon an uncertain future. And what makes the battle between the Pantheon members and Ananke, who wants to sacrifice their youngest member Minerva and stave off the mysterious “Great Darkness”, resonate even after closing the comic is emotionally devastating violence depicted by McKelvie and Wilson. Gone are the stylized, dance-like fights of the earlier issues. In their place, there is plenty of blood spurting, clawing, hacking to go along with a huge plunge into darkness for our fangirl turned deity, Persephone.

WicDiv has a big ensemble cast, but Gillen, McKelvie, and Wilson give each and every member of the Pantheon a moment or two to shine before drawing the curtain on this arc. Minerva is mostly a damsel in distress, but by the end of the story, she truly is the most moral Pantheon member despite being kidnapped and almost killed by Ananke. Amaterasu’s naivete continues, but its her innocence that spurs Urdr into action. When it comes to Dionysus, McKelvie channels Jack Kirby via Paul Oakenfold showing his power when it comes to pure combat with punches that fly off the panel. Just like her solo story, Sakhmet continues to be a creature of pure desire and id, and this comes back to bite her in the ass. And throughout the issue, Gillen and McKelvie show all three sides of the Morrigan’s personality as Badb hurls insults and crows at Ananke, Gentle Annie soothes and heals Minerva, and Morrigan herself is like a return to factory settings. 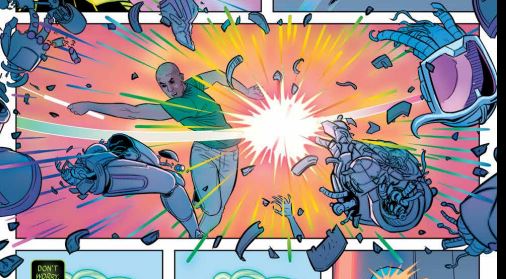 The characters who experience big changes in WicDiv #22 are Baal, Woden, Urdr, Ananke, and especially Persephone, who actually ends up living up to the Destroyer name that Ananke keeps hurling at her. In keeping with his roots in the music of Kanye West as well as a Canaanite storm god, McKelvie and Wilson imbue Baal with her power. Wilson does some of his most striking palettes when Baal is in action with gorgeous cascades of purple and white as he tries to defend the rest of the Pantheon from Ananke. Gillen gives him this kind of, slightly hypocritical father figure vibe as he embraces Persephone and tells her not to kill Ananke even though he just possibly offed Sakhmet for using her powers to stun a bunch of Pantheon members. Even though he was a loose cannon earlier in the series, McKelvie gives him a calm, almost mature demeanor to go with his as he stands with a neutral, yet loving expression whereas Urdr and Persephone fly off the handle.

And if Baal is the Pantheon’s team dad, Urdr fits into the “team mom” role from almost the beginning of the issue where Amaterasu calls her the “adult” of the group. Urdr has wanted to stay out of the petty squabbles between the sky and Underground gods, but Ananke is about to take a child’s life so she jumps into action and succeeds in uniting them against a common foe in her blunt, peppered with “fucks” way of speaking. Baal and Baphomet are still spouting off one-liners in the face of death, but Gillen writes Urdr with the straightforwardness of a butcher knife cutting through fat as she looks for just the truth even if she is a little freaked out about handling Ananke. (She gets a great superhero comic art indicting one-liner early on though.) And moving forward, it seems like she will be running damage control on the events of WicDiv #22, especially when the general public learns about them. 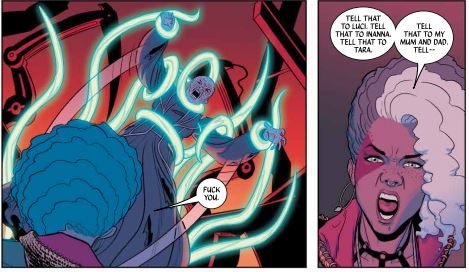 But the most powerful moment of WicDiv #22 and possibly the series up to this point is the almost equation of Persephone with Ananke after Persephone decides to murder her because she killed Laura Wilson’s up to this point barely mentioned sister. Jenny Wilson has barely appeared an issue of WicDiv, but she ends up being the justification for Persephone to kill Ananke in front of the entire Pantheon. But Gillen, McKelvie, and Wilson turn this from a simple revenge story into something much darker with the way Persephone is drawn and the dialogue of Woden, who comes to just after the deed is done. He tells Persephone to her face that she killed Ananke because of “necessity”, which is the justification Ananke gave for all her killings and actions throughout the series. The wide mouthed “Oh, crap!” responses of the rest of the Pantheon are the same for the readers too as suddenly Laura is the ascended fangirl version of Anakin Skywalker, Michael Corleone, or insert tragic white dude protagonist here. And for the last few pages of WicDiv #22, Wilson scuppers the pretty or trippy color palettes and replaces them with a rough red one in a way that suggests Lady Macbeth, who could never remove the murder of King Duncan from her mind no matter how often she washed her hands. With a background of blood and damaged machinery around her, the visuals point to Laura being a villainous figure and being a new, more chaotic Ananke.

WicDiv #22 ends the “Rising Action” arc with character defining moments for Urdr, Baal, Ananke, and Persephone as Kieron Gillen, Jamie McKelvie, and Matthew Wilson effectively end this era of the comic with bloodshed, moral compromise, and a few power packed action beats along the way. Kudos again must be given to McKelvie’s skill with facial expressions that enhance the “performances” of the characters in WicDiv, like the concern on Baal and Urdr’s faces, after Persephone kills Ananke. One glance can define a character. Wilson goes for the gut in his color choices as the shininess of the battle between Pantheon members gives way to red, scarlet, crimson, you get the point. And instead of going the later seasons of Game of Thrones route in his plotting, Gillen goes for a plot twist that is rooted more in development of a beloved character (Persephone/Laura Wilson) than in shock value.

All in all, WicDiv #22 will give you angry chills and hot tears until November when the “Imperial Phase” arc starts.