It’s been a bit over a month and while I’m a little less jazzed on JMS after reading his Terminator: Salvation work (messin’ with my Terminator is like messin’ with my emotions – best watch yourself Genisys!) I’ve been looking forward to Act Two of “The Way Back”. Last issue saw our down-on-his-luck PI Roy Chambers in the middle of a peace rally led by the victim of the murder he’s investigating. Transported a decade into 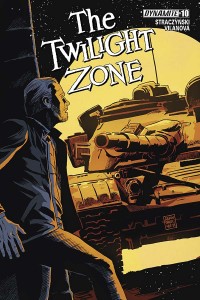 the past (that’s 2004 for those of you who can’t math good) Roy meets John Black and tries to find a way to change the past. But since this is the Twilight Zone, the forces that be find every which way to keep Roy frustrated. The Twilight Zone = the ultimate troll.

While this issue is light on last issue’s drama, it does inject the fantasy element with full force. We get two trips to the past (with more to come), Roy reverse-Marty-McFlying into old photos (but of course not the ones in his employer’s office), and one of my favorite Twilight Zone tropes – the protagonist trying to convince others they’re not crazy, being told they’re crazy, rinse, repeat. It’s been done to death and you can always expect it but I get a strange satisfaction when characters acknowledge the impossible premises of their stories. Pay lip service to reality, then move on – it’s all I ask.

Having gotten my hands on the previous Twilight Zone arc, I saw JMS is trying to create a tapestry of interconnected characters instead of stand-alone “episodes”. Mr. Wylde, a mysterious character in this arc who explains our time travel rules in this issue, appeared in the last collection as a.. well, let’s just say he’s not entirely what he seems.

Still digging Guiu’s art. The lines on Roy’s face contrast with John’s clean-cut veteran sheen. More than just making the detective look haggard and run-down, they make it easier to believe Roy is a guy looking at a last chance for redemption. Speaking of which, I worry this story may have telegraphed a bit too much of what’s to come. All the talk of choices, it’s hard not to imagine Roy making his redemptive act his final one.

Review 5 (out of 7) – Familiar Twilight Zone tropes with a modern coat. Competent issue, but I’m knocking it because I think it might have given away the ending to the upcoming finale.