The original Secret Six run was one of my all-time favorite comic series, and was a bit saddened when it became a victim of the New 52 Relaunch. Even more so since a lot of those characters disappeared in this new universe. Fast-forward more than 3 years later, and Gail Simone, who was responsible for the original’s team demented sense of loyalty returns to give us not more, but a new Secret Six. Does it live it up that legacy though? 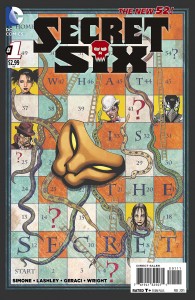 Right off the bat, Simone establishes that she can’t do the same thing again and the comic is all the better for it. We don’t get the traditional team or an origin of similar nature. Instead, this comic, like all good stories, starts with a bar-room brawl. At the center of this brawl is the New 52 introduction of Catman (or at least, I think it is), he seems to be hiding some Hulk-level secret now though. He keeps on telling people that they don’t want to be with him in a confined space. Not sure if he just lashes out violently when trapped or has some new, dormant powers, but it shall be interesting to watch and see what happens.

After the brawl settles down, we get an introduction that seems more Suicide Squad than Secret Six with Catman waking up in what could based be described as a prison box with 5 other inmates. They were all drugged and bought to this secret location, and any time they try to escape are met with some extremely negative feedback. While Catman is getting acclimated to his new home, a puzzle pops up and as always a mysterious voice is heard. If they don’t solve the puzzle in 10 minutes, one of them would die.

The ticking clock serves as a way to introduce the new gang, and their abilities. It’s a nice way to kind of light a fire under all of their asses, and it does help give the back half a framing device because there really isn’t much else there.

And that proves to be my biggest problem with this first issue, not a ton happens to kind of hook you for the future. It has Simone’s trademark wit and curious humor, but that can only take a book so far. Even the “big” reveal at the end of the comic doesn’t really scream must read next week. I know it would have been difficult to establish a group of 6 characters, an actual danger to them all and not make it feel too crammed or too bloated, but I feel like this slow simmer didn’t help the first issue either.

The art really fit this book to a tee. It wasn’t a super developed style. Instead, it had a rough and unfinished look (not a compliment!) to it. Giving life to these characters who aren’t necessarily what you would consider complete human beings nor completely good people at that. It also helped to make all the characters stand out, though visually a vast array of builds in their design. Also was keen on their color usage.

Review 5 (Out of 7) – A fun read no doubt, but I wish it had that one thing that really hooked me for the rest of the series.