When this title was announced I didn’t have high expectations and, unfortunately, the inaugural issue confirmed my bias. I found the dialogue clunky, cluttering up Henry’s art to aide a premise as tired as an old dog. It’s funny how much things can change in a few short issues. I stuck with the book, reasoning that even my least favorite Valiant books (lookin’ at you “Ivar, Timewalker”) still had some redeemable moments and LaRosa’s art in particular was too good to leave on the rack. By issue #2 I was back on board and issue #3 firmly hooked me on this “Tarzan meets Lord of the Flies with dinosaurs” hodgepodge. With Book 4 we say goodbye to our protagonist (for now?) with a finale as brutal as its title suggests. 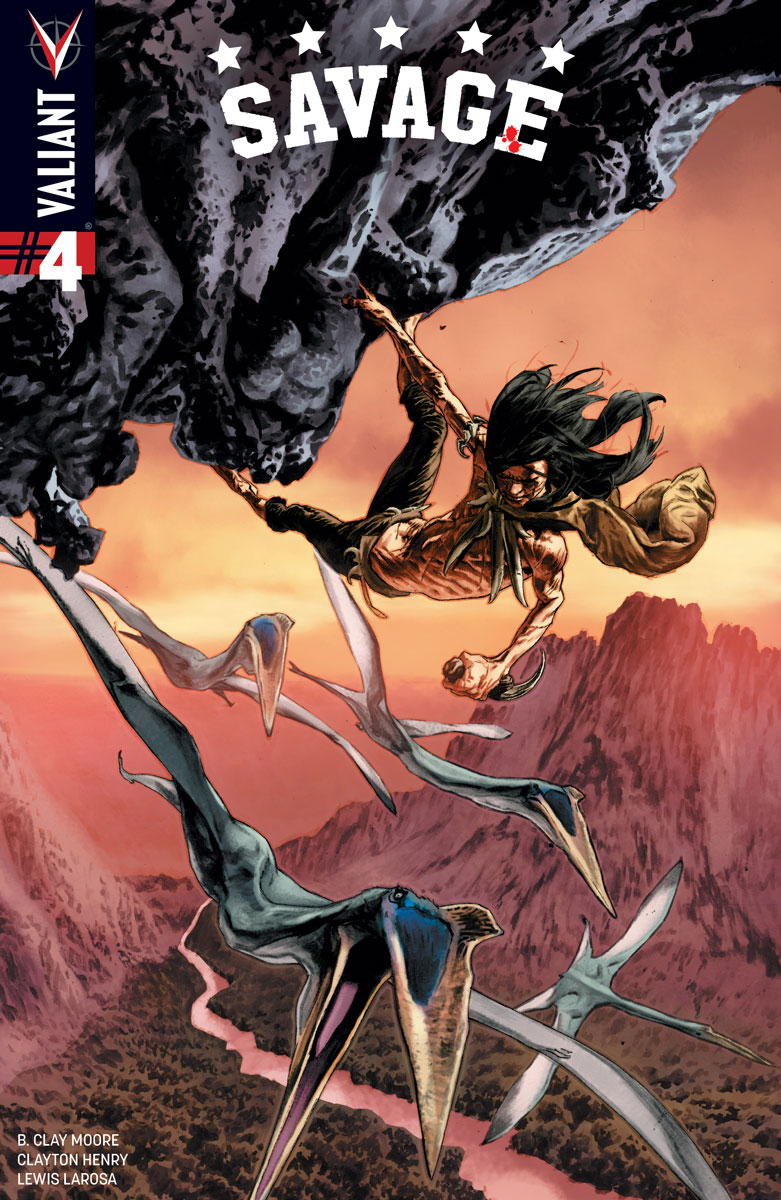 Despite Valiant mainstays like LaRosa and Henry lending their signature styles to this book, this has been a very different Valiant story from the beginning. Maybe Jeff Lemire (“Bloodshot Reborn”) could have told this tale but Moore manages to balance moments like Kevin riding pterodactyls (yes, that cover is not just for show – it leads into the first page which has our hero totally Flintstoning it) and using fresh human remains to set a dino-trap for the men who murdered his mother (what is it about Kevin’s and setting traps for bumbling no-gooders?). At times it is a vicious book, but it also has Kevin stoically resolving at his father’s gravesite to finally go home. And, of course, this is all amongst the backdrop of an island filled with long extinct beasts.

However, (and no disrespect to Moore), it is his artists that steal the show and he gives them ample room to inject their flair into the panels. Henry and LaRosa alternate between past and present, respectively. Their two styles, while very different, create an interplay that becomes dynamic once it is abandoned. Henry takes up the present following a stunning spread where both artist merge their methods into a hybrid page, the likes of which I’ve rarely seen. Even on my third read I’m still finding new details to ogle.

Review 6 (out of 7) – Joins other mini-series, like “Britannia” and Divinity”, that expand the boundaries of the Valiant Universe. Lovingly drawn and colored; a strong yet simple story that let’s the art do most of the talking. Turok who?