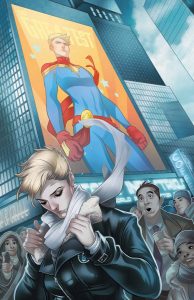 Wow, Carol Danvers has some issues, and writer Margaret Stohl probes into them in Mighty Captain Marvel #0 with the art team of Emilio Laiso, Ramon Rosanas, and Rachelle Rosenberg, who shows off her versatility as colorist from the jewel-like vistas of space to the light brown tones of a Boston bowling alley from Carol’s childhood. The comic deals with the fallout of the (still uncompleted) Civil War II with Carol still leading Alpha Flight and protecting Earth from extraterrestrial threats while she is estranged from her best friend Jessica Drew and throws herself into her work neglecting her personal life.

The first part of Mighty Captain Marvel #0 is a literal therapy session with Carol spilling her guts and her recurring dreams of being attacked by Iron Man at a hologram because she doesn’t want to come back to Earth for some R and R. As an Air Force and NASA veteran, she is one of the most driven people in the Marvel Universe and has scaled every obstacle in her path, including her father refusing to help out with her college. However, she sometimes get too caught up in the work and pushes away friends and comrades, like the members of Alpha Flight and super-BFF Jessica Drew. Even though she “won” the second Marvel Civil War, it feels like a defeat with the deaths of Rhodey and Bruce Banner. Stohl, Laiso, and Rosanas explore her feelings about these events and show how it affects her job performance when she accidentally attacks some NASA satellites and hits Abigail Brand while she’s trudging the corridors of the Alpha Flight Space Station.

Laiso and Rosanas’ art is hit or miss for me with the exception of the naturalistic flashback montage of  Carol as a teenager, her time in the Air Force/NASA, /I kind of wish the whole comic had been done in that way, especially the final double page spread of her floating in crimson space and finding her purpose to be Earth’s mightiest hero. It’s almost a spiritual experience, and one that stands out in a comic littered with awkward poses, constipated faces, and shaky fight choreography even though you can definitely tell with Carol is punching something big. Laiso and Rosanas try to combine cartooning and photorealism, but fall short, like in the opening dream sequence where Thor, Ms. Marvel, and Jessica Drew’s limbs are all over the place. The inking is tighter in the flashback scene, and that’s why it stood out to me compared to the rest of the book.

The art in Mighty Captain Marvel #0 isn’t the greatest, but Margaret Stohl (Who wrote the excellent Black Widow: Seeing Red Young Adult novel.) has a grip on Carol Danvers’ personality, including her anxiety, struggles with work/life balance, and of course, her ability to kick all kind of alien ass. However, Stohl also has a more nuanced view of Earth/alien politics using them as a metaphor for refugees being attacked by terrorists while adding a dash of a Chosen One-type storyline.

Space opera, superheroes, and psychological problems with a helping of guilt, daddy issues, and baseball jokes show that Mighty Captain Marvel #0 is its own comic book unlike the previous volume, which operated too much in the shadow of both Ultimates and Civil War II. The art could be better though.