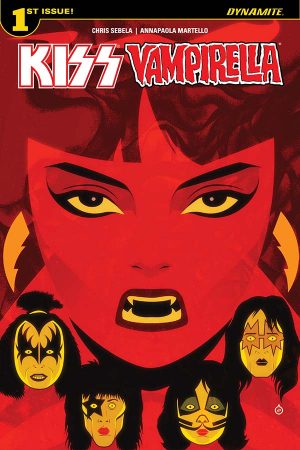 It’s 1974 in L.A., and rock’n’roll is dying and waiting for Eddie Van Halen to bust out the paddles and shock them back to life. The young band KISS is in town to record their second album Hotter than Hell, but the makeup wearing rockers have the supernatural along with navigating the city of angels. However, Vampirella and her newly minted sidekick Lily get the lion’s share of the action in Chris Sebela, Annapaola Martello, and Valentina Pinto’s crossover comic Kiss/Vampirella #1. They get the intrigue, action, and Vampi gets to be part of a kick-ass all girls band called Witchkraft, which gives Martello and Pinto an opportunity to kick out the Goth styles and use plenty of black in her palette respectively.

Even though she’s a vampire and quite violent at times, Vampirella is a real ray of sunshine in Kiss/Vampirella #1 and the perfect deliverer of exposition and a general guide to the supernatural side of the Sunset Strip for both readers and Lily. She is very in tune with her surroundings and doesn’t just leap into action, but uses her cover as a rhythm guitarist to see who might be trouble down the road. It seems like Vampi is genuine friends with Lily, and whole comic about their relationship could be interesting. This is why it seems like the KISS seems shoehorned in although the bandmates have an easygoing vibe to them and are more connected to overarching apocalypse plot that has something to do with their instruments. When Kiss/Vampirella #1 revels in its cheesiness, it’s a great comic

One thing I disliked about Kiss/Vampirella is that Sebela would cut from a Vampirella and/or KISS scene just as it was getting to go to another scene. For example, Vampi and Lily are tailing a middle management music type that has a demonic aura and then get surrounded by his stronger, more threatening associates. Valentina Pinto sets the scene by deepening her blacks and greys, and Annapaola Martello has shown she can draw action in a cold open where Vampi beats up a creepy stalker guy. But they decide to cut to KISS at the pool trying to get their friend Frankie sober while he babbles obvious foreshadowing dialogue. And the action scene is limited to two speed line filled panels, and it’s kind of a drag after the previous pages of buildup.

However, the overall tone of the comic is pretty rockin’ and a little bit tongue-in-cheek as Chris Sebela gives Vampirella sarcastic dialogue about things that go bump in the night even though her main job is a demon hunter. Historically, she’s always gone for comedy before melodrama, and Sebela and Martello keep that intact. The jokes sometimes get lost under setting up her character’s history and purpose, but Vampi and Lily have a nice veteran/babe in the woods dynamic that hopefully will get explored in future issues.

KISS and Vampirella are two very cool things, and Annapaola Martello and Valentina Pinto establish this through art that is both dark and campy. Chris Sebela excels at writing both properties separately although his transitions are a little jarring. The theme of rock becoming unpopular in the early 70s because of disco or the Altamont tragedy or Nixon or whatever excuse you want to put here grounds Kiss/Vampirella #1 so it doesn’t devolve into a generic end of the world in L.A. story.

Overall Rating: 5 (out of 7)– Kiss/Vampirella #1’s glam rock meets old school horror vibe makes it fun to read and look at although some of the scenes don’t mesh.