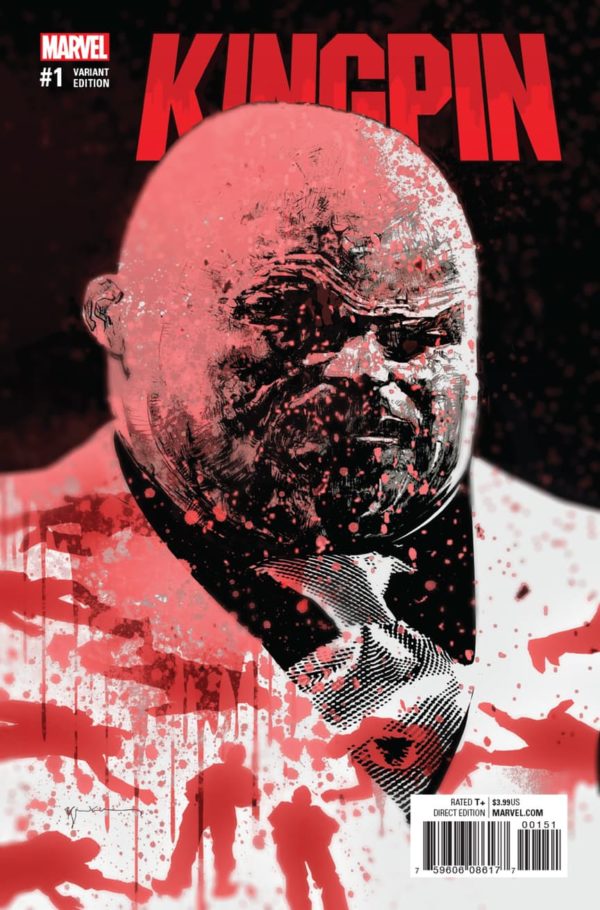 Kingpin #1 is a refreshing addition to the Marvel Universe and is a departure from the no holds barred crime tale of writer Matthew Rosenberg’s Civil War II Kingpin. First of all, he doesn’t decide to tell the story from Wilson Fisk’s POV, but that of Sarah Dewey, a foreign policy journalist, who is better known for her boxing profiles. Kingpin wants her to write a biography of him that includes the skeletons of his past as of way of showing the world how far he has come from a gangster to a decent businessman. But has this 400+ pound leopard of a man really changed his spots? (No, leopards don’t weigh that much.)

Ben Torres’ depiction of the Kingpin has physical and metaphorical weight in the way his best artists, like his co-creator John Romita Sr, Frank Miller, and Dave Mazzuchelli have drawn him in the past, as his sheer presence attracts your eye to the page. The other characters, like Sarah and some of the big wigs at his party, are drawn more photorealistically compared to the cartooning for Kingpin. He is more of an entity than a human being although Rosenberg’s writing humanizes him in a similar manner to Vincent D’Onofrio’s portrayal of the character in the Daredevil TV show. This is a pleasant, if still socially awkward Kingpin who chats frankly about his days dealing drugs from a donut shop and knows he can get away with calling a woman at her apartment at 11:30 PM while making an anecdote about his son and her Spider-Man pajamas.

He has a really nice vibe compared to the misogynist, overprivileged men that populate the gala that Kingpin invites 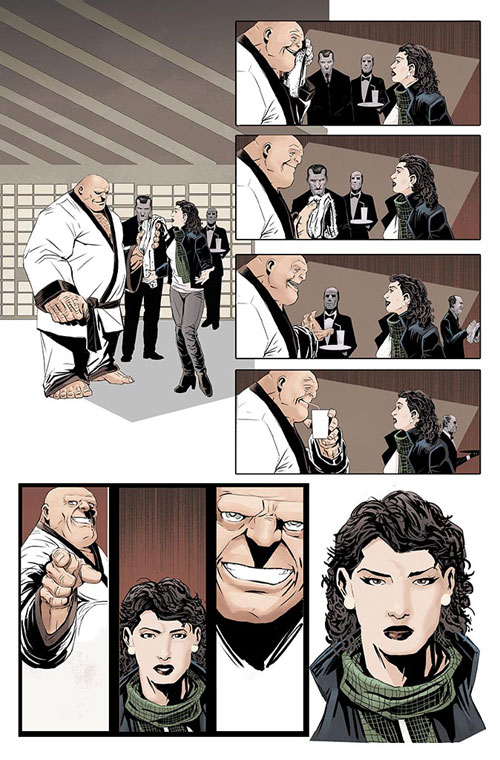 Sarah to as well as the know-it-all machismo of the ones at the boxing ring in the issue’s opening scene. She isn’t welcome in their boys’ clubs except as a sex object, which Rosenberg alludes to with multiple references to her possibly being a prostitute or escort. Even Matt Murdock comes off as a dick in his cameo where he instantly judges Sarah’s character because he saw her with Wilson Fisk. He realizes that as she walks off and gives her a charming farewell, but the civilian identity of Daredevil seemed very self-righteous in that context.

On the other hand, Wilson Fisk is kind to her if a little forward because he has faith in her writing abilities to bring justice to his dark past and hopefully dark future. His politeness extends to his treatment of a homeless man at a park to whom he gives a twenty dollar bill and later more plus a watch even though Kingpin could probably beat him to death. But is it a change in character, or just a PR stunt for Sarah to be sympathetic towards him when she writes his book? The ending of the comic doesn’t point to him being on the side of the angels, which is reflected in Jordan Boyd’s black coffee color palette, but Rosenberg and Torres are biding their time for him to fully break bad.

In Kingpin #1, Matthew Rosenberg, Ben Torres, and Jordan Boyd construct a slow burn crime story from the POV of a talented, yet flawed female journalist. One day, Sarah Dewey may usurp Ben Urich for the position of favorite journalist in the Marvel Universe with her biting critiques of bootstraps narratives. But for now, she’s providing a fresh perspective on the poisonous underbelly of Earth-616’s New York City.