Last issue ended with one of the most shocking cliffhangers yet: Bernice, Emmy’s long-time friend, is hunting down the supernatural beings of Harrow and is willing to do what it takes to protect the townsfolk, relationships be damned. It was quite a shock to Emmy, who has spent recent issues focused on her perverse lineage and a group of troublesome hunters. Bernice puts it best when she says, “… lately you seem to care more about haints than you do about people!” It’s hard to argue with the evidence, but Emmy has spent the entire series trying to balance her unique roles as 1) a small town girl (“livin’ in a lonely world!”) and 2) a 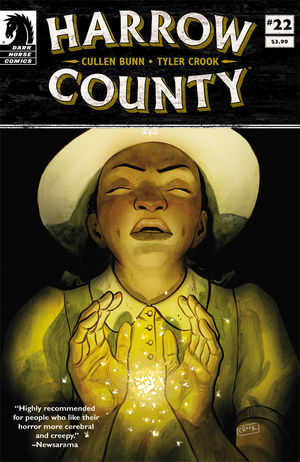 While Emmy has been struggling with her identity, Bernice has been developing her own supernatural prowess with the help of Lovey Belfont. Lovey’s beef with Hester has made her immensely distrustful of Emmy and it looks like the seeds of doubt have been planted within Bernice. How much longer until “Harrow County: Civil War”? Bunn is mindful of the history between the two, so that their disagreements read as friends being forced into conflict by their respective duties. Even though Bernice has taken the aggressive move of trapping haints, she reminds Emmy of her blindspots and that, “A lot of folks are just as scared of you as they are of the haints.” The girls aren’t mortal enemies yet but it remains to be seen how much longer the tenuous peace can be maintained.

Bunn continues to weave an intriguing and creepy horror-fantasy, unafraid to pile on new moral quandaries for our heroine. Part of me wonders if Kammi (or some other actor) is actually behind Bernice’s turn. Either way, Emmy has some very hard choices ahead of her. Crook produces some stirring images, particularly when the girls confront a keyhole ghost (so much red!). And last (but certainly not least), don’t let the bright art in the Chris Schweizer bonus story fool you – it’s one of the most unsettling one-pagers yet.

Review 5 (out of 7) – a new dilemma for Emmy, Crook’s trademark art, one disturbing bonus story, and a cliffhanger that will keep you in anticipation until next month.