Following the many intense revelations in the previous issues regarding Emmy’s “family” and the true nature of her power, Bunn kicks off a new arc by taking the title back home to Harrow. Series regular Tyler Crook is back on art duty, and while he was well served in his absence by McNeil 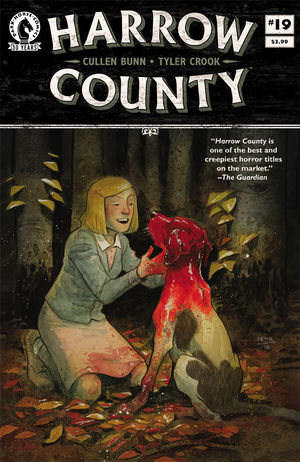 and Lee, the Crook look is as much a part of “Harrow County” as Emmy and the haints. The opening spread gives us a sunrise panorama of Emmy’s hometown, with the night still holding onto the sky. The watercolor interplay between midnight blues and golden greens is another visual expression of the “darkness vs light” struggle that runs throughout the title. Even on a sunny day, shadows are never very far in Harrow.

With new information of her lineage, Emmy ponders aloud if she is the incarnation of the evil Hester or the (apparently) benevolent Amaryllis. However, her self-reflection is cut short when she discovers a group of hunters searching for strange game in her forest. Emmy shows how crafty she can be without witchcraft by getting her father to take her to a local hunting hangout and sniffing out the out-of-town trappers. She is able to talk privately with Luke (a young man joining his uncles in their pursuit) and warn him about the beasts of Harrow. This interaction stands out because it might be (and please correct me if I am wrong) the first interaction Emmy has had with a boy her age. Luke’s stutters (and his uncles’ jokes about running away with a “pretty Harrow County girl”) imply his attraction but it doesn’t seem to be mutual. We have covered so much in 19 issues, it is impressive to have gotten this far without a hint of romance. Then again, having reality altering powers and a homicidal, magical family on your mind may leave “relationships” far down the list of priorities.

I naively thought there wouldn’t be much story to tell after the first arc wrapped, but Bunn continuously generates plots that are both surprising and intriguing. What started as a straight-up horror title has turned into a dark fantasy with a rich lore that has only begun to be explored. And while I wish this issue would have continued with Malachi revealing even more to Emmy, the fallout from #18 is still being processed in the background of this new story. Crook’s art adds to the unease that permeates the issue and the Aud Koch-illustrated backup story about Priscilla the haint and dead owls (one of my favorite back up stories so far) make me itch for #20.

Review 5 (out of 7) – Another solid issue coming after one of the biggest revelations in the series. Don’t go hunting for monsters in Harrow County lest they hunt you back.