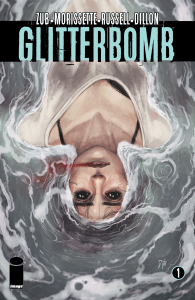 In their creator owned horror comic Glitterbomb #1, Jim Zub (Dungeons and Dragons), Djibril Morrisette-Phan (Ultimates), and K. Michael Russell (Postal) go Hollywood as they follow the pretty messed up life of Farrah, a washed up actress, trying to keep her head afloat in the almost literal dog-eat-dog world of the film industry. The comic starts as a showbiz satire, but by the second page, Farrah has her tongue down a Hollywood exec’s throat.  And not in a romantic way either as an accident by the beach has given her frightening abilities.

Even though she is a murderer, Zub and Morrisette-Phan craft Farrah into a sympathetic (and kind of pathetic) character throughout Glitterbomb #1. Her life is a series of rejections, insults, and bargaining. She used to be famous once upon a time, but now she’s forced to listen to lectures on craft and Cosmo type advice from up and coming actresses. And Farrah can’t even pay her babysitter as she is on constant alert for a producer or agent to give her a comeback role and regain some of the old fame she had as the psychic on a popular sci-fi show back in the day.

Farrah is a lot like Walter White in Breaking Bad Season 1 when you felt a perverse sense of thrill as this seemingly nebbish high school chemistry teacher and car wash employee was going toe to toe with real gangsters and getting some money to provide for his family albeit in an illegal way. And Morrisette and Russell show the rush of darkness every time she uses her power with blacks and oranges as she devours an annoying film exec or some homeless guy 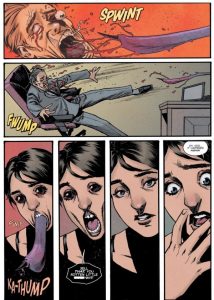 who was trying to jack her car keys. The tongue/super powers transform Glitterbomb into a comic of pure id as Farrah is getting revenge on the people, who have treated her like shit or taken advantage of her and her former fame.

A key component into making Farrah a fully fleshed character in Glitterbomb #1 is the ability of Morrisette-Phan to draw complex facial emotions. The conversation between her and a younger actor named Brooke is a study in characterization via facial expressions. You could lose the dialogue and follow the verbal tete a tete through eye movements and brow wrinkling as Farrah tries to be all cool by shaking off her “fortune cookie” advice, but is instantly cut down to size by Brooke’s “bless your heart” type expression when she realizes that Farrah hasn’t been famous for a while.

And speaking of no dialogue, Zub lets Morrisette-Phan and Russell do most of the heavy lifting in Glitterbomb‘s saddest sequence and is basically Farrah hitting rock bottom as she goes to the beach. Russell drains all the relaxation and glamor from California beaches with a desaturated palette of boring ol’ orange and grey, and Morrisette-Phan gives the sky that L.A. smog feel that TV shows and films often forget is the city’s number 2 characteristic after freeway traffic. This isn’t an actress or model doing a photo shoot by the beach, but a woman crushed in the grist mill of how Hollywood casting agencies treat women in their thirties and above.

The intense sadness of this scene and Farrah’s tenuous handle on her home life gives the scenes where she’s doing the tongue monster thing an extra push of catharsis as we end up rooting for and not against the monster in Glitterbomb #1. Farrah also hesitates and freaks out in a kind of reverse transformation sequence from Morrisette-Phan as she realizes that she has taken life even if it belonged to a scumbag. Her humanity is definitely intact so far.

Jim Zub, Djibril Morrisette-Phan, and K. Michael Russell channel the pain of rejection and the cutthroat nature of Hollywood in Glitterbomb #1 to craft a new kind of anti-hero in middle aged actress Farrah while fully immersing the comic in both the revenge thriller and body horror genres.