The new era for the Scarlet Speedster starts here! 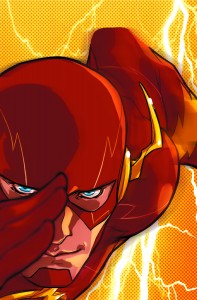 The Rebirth issue of the Flash was markedly different than the rest of the Rebirth books DC released this month. Where the rest of the line used the one-shots to launch their new story arcs, Williamson went for something different with the Flash. The story here frames last month’s DC Universe Rebirth, opening with a shot of a familiar looking crime scene (wife murdered by her husband, the couple had a kid who witnessed it) before pulling out and revealing it’s the not the murder of a Nora Allen, but rather a very similar case that Barry is working on in his day job as a Central City CSI. From there he catches glimpses of his past, before we get to the emotional reunion of Barry and Wally from DCU Rebirth. Wally fills Barry on the lost time and his reluctance to meet his aunt Iris as he fears she won’t remember him, before encouraging Barry to follow up with Batman and investigate the lost time. Before they split up (and Wally races off to find the rest of the Titans), there’s a nice gag where Wally gives Barry grief for forgetting how to use the Speed Force to create a new costume and still using his old ring, it’s a bit of levity that you expect to find in a Flash comic.

I’ve always felt there’s a bit of a formula for writing a successful Flash comic, you need to have equal parts fun, legacy, adventure, and mystery. Even with the small sample of just one issue, it seems very obvious that Williamson gets this. The Flash should be a character that enjoys what he does, smiles, and dare I say it, has fun using his powers to help people. You can save the dark and brooding for Gotham, the heroes (and villains!) of Central and Keystone Cities have always been brighter and more optimistic. In just 20 pages, Williamson gives us all of these things in spades. After years of just running in place, Flash finally seems to be in good hands again. 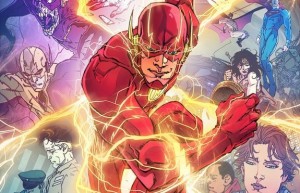 I’d be remiss to discuss this issue and not talk about Di Giandomenico and Plascencia’s art. Di Giandomenico line art reminds me a bit of Scott Kolins work on the book back in the 90’s, it’s very clean and feels very kinetic, there’s a splash page early in the book where it feels like Barry is literally going to run off the page. Plascencia’s color palette is a perfect fit for the book, the scenes with Barry out of costume are a bit muted, and provide more of a real world look, but once he suits up, the reds and yellows are vibrant and pop off the page. The Speed Force lightning in particular crackles and pops in the most eye catching of ways. This is an extremely good looking comic.

Verdict 7 (out of 7) – The Scarlet Speedster is in good hands with Williamson, Di Giandomenico, and Plascencia. And that’s a Flash Fact.