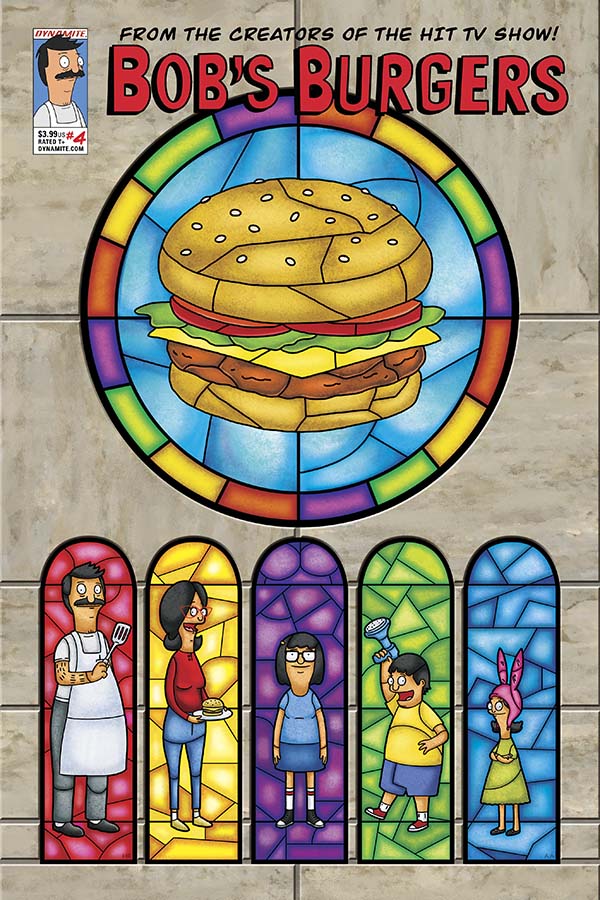 “Worship the Burger, Burger is love,” says the cover, with the Belcher brood looking quite saintly in stain glass. Following last issue’s inflatable cast I hope they keep these variants up, the more bizarre the better. Much like the changing exterminator van/shop next door names in the show’s intro these covers are serving as a great couch-gag-like companion. Flip the book open and we are repeating last issue’s formula, bringing back much of the same talent as well, to highlight each family member. 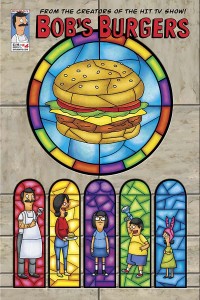 First is another volume from Tina’s Erotic Friend Fiction, giving us what we all want – a butt-centric story. “Franken-Butt” is just what you imagine and thankfully Tina’s posterior fixation never loses its charm. I could read about Jimmy Jr’s butt all day (I’m not weird – you’re weird). Louise as a constable with her ever-present pink ears was a good gag, but I liked the cameos from outside the family, like Teddy and Mort. They even managed to squeeze in that terrible old lady who hates Bob and she’s exactly the same in comic book form. The last few panels expertly pull off the show’s awkwardness to the point where it reads like they’re improvising.

Bob’s Burger of the Day Ideas entry improves from last issue, giving him half a dozen punny food titles tied to 80s movies. What really had me chuckling was the self-confident note Bob wrote to himself. Bob is convinced his groan-inducing, far-reaching wordplay is clever which insures more entries to come.

With Louise’s last adventure being such a blast, I had high hopes for “Louise Is Invisible”. But at 8 pages and an appearance by the Pesto Twins, I felt this tale never ran with the concept. Louise can be downright diabolical on occasion and I was hoping for some serious shenanigans that never came.

Linda’s single page letter to a record company, while not as Linda-ish as I wanted, provides my favorite image of the issue and that is all I will say about that. And Gene closes the book with “Chupacabra-Cadabra, The Musical”. 6 pages of song and showmanship about a goat-killing cryptid with big dreams has to be seen to be believed.

Review 5 (out of 7) – While not as visually dynamic as last month, this issue still brings the jokes and is one fun ride with the burger-selling Belchers.