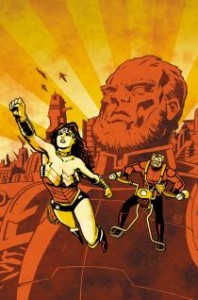 Well it is finally here, we get to see New Genesis and Highfather, plus its always fun seeing more of Orion. What Brian Azzarello has done with this book so far in the new 52 is how I would love to see a Wonder Woman movie. The supporting characters again this issue are just as interesting that at times you often forget this is a Wonder Woman solo book.

If you have been reading this story you know how excellent the art has been, again we are spoiled this week. New Genesis looks so beautiful. Supertown looks excellent high above the ruined world. The ruined world looks perfect as well. This really adds more depth to the amazing story we have had so far.

This issue digs deeper into Orion, which is fun since he has been a great character thus far in the series. We get a better understanding of what appears to be a tough home life and a father that thinks of his son as a failure. This layer of depth was tough seeing how awesome the character really is. We get a cool end to the the issue when we think Orion is going to take the baby away, yet he ends up doing the right thing and siding with his true “family”.

Overall, I love that this series is off doing its own thing away from everything else in the DC Universe. The story has been great and continues to impress. I would love if DC pulled a Marvel and did a little recap at the beginning of the issue. This has been a story continuous story for 22 issues now. 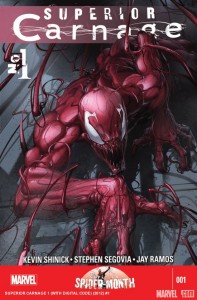 My knowledge of Carnage is not much, so when I saw a number 1 issue I got kind of excited. I know he is a lot like venom but a crazy murderous more intense version. After reading this issue, it seems that there is probably more back story that I should have understood, but I didn’t need it in order to understand and enjoy the issue.

We get introduced to our narrator a man thrown into a super villain prison due to budget cuts. He has no super powers, he is in jail of a white collar crime. He is always fearing for his life because he is no match to the other people being held in the prison with him. Thing change when Carnage gets brought into the jail, he is a totally different class of villain and everyone fears him. Carnage eventually gets loose and goes nuts killing several people. Without getting into to many spoilers we have an interesting twist at the end that makes for an interesting plot going forward.

Overall, Carnage seems like an interesting character and the cover of this issue was amazing. I felt the art was okay it was nothing special, a few cool looking parts here and there but nothing stood out to me. I am interested in the story and where it goes from here. 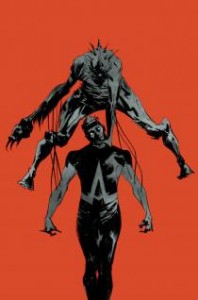 Jeff Lemire has continued to do a fantastic job with Animal Man. I will say that I have loved the art since the end of Rot World, but I would be repeating myself again and again. This issue started right where the last last one let off. Buddy had spotted some kind of crazy monster and was overwhelmed with reporters, while his daughter was in the Red.

I really enjoy seeing the Red because it is so weird and mysterious. The Red really is a totally different world and after seeing Buddy’s Daughter accept her role as Animal Girl we see the red changing. This was very exciting learning that since she accepted she can change the red with her thoughts.

Meanwhile Buddy is tracking the monster when he gets over taken by several of them. Buddy is no match for the several different monsters, and they begin collecting his blood. I will leave it at that because who these people are and the person they are working for is an exciting twist that makes this issue.

Overall, this series seems to be shifting more and more away from Buddy and more toward his daughter. This is a cool take on things, I would like Buddy to remain and continue fighting crime with her doing more of what the Red expects of her.