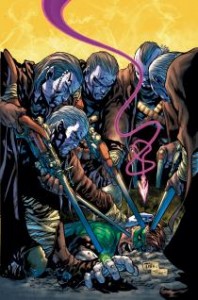 Green Lantern #26 continues Hal trying to round up unauthorized rings to save the emotional spectrum. This really continued the battle Hal was facing vs a whole planet. The battle went on and the clan members began using their war weapons and Hal realized that they couldn’t keep up with so many numbers against him and Kilowog so he calls ever single member of the Corps for back up. They all arrive including Mogo and win the battle. In the end Hal realizes that to use the whole Corps for one ring got out of hand and that this would be harder then he thought.

While I like that there is consequences with the Light Out story and wanting to save the light, it seems like Hal is making some weird/dumb decisions. The past two issues really felt like filler issues and have battles for the sake of battles. It would be nice if this book focused more on Hal trying to rebuild the corps as well as training and introducing more character.

Overall, the issue was just filler and doesn’t really do much in moving the plot forward on how the Corps are going to be respected and strong again. There needs to be more focus and rebuilding the Green Lantern Corps and gaining the respect of the Universe. 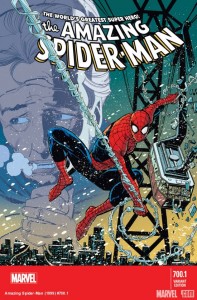 The Amazing Spider-Man (Peter Parker) is back if only for 5 issue but it s nice to see him. The issue starts out with a page on the origin on how Peter becomes Spider-Man, in case anyone needed to be refreshed. The issue really spent more time with him as Peter then as Spider-man. There were a few people who needed saving, while Peter told us how he does this day after day and that it gets very tiring. He seems to be getting sick and can’t get warm. He visits Aunt May and they talk about Uncle Ben and how November is a time to relax and how Peter should relax to begin feeling better. He goes home and falls asleep as a huge snow storm hits and Aunt May needs his help.

It was nice seeing Peter back if only for a few issues and this story will probably mean nothing in the Spider-Man big picture but it is a nice little break. The art is average but the snow storm panels have a lot of detail. It was interesting seeing Peter save people without the Spiderbots all around that the Superior Spider-Man uses now.

Overall, this is an average story that is trying to sell some comics stating that Peter is back, but it is only for 5 issues. This story won’t have an impact on the Spider-man canon but it is nice filler while waiting for Peter to eventually come back in Superior Spider-man. 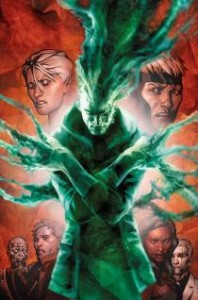 Swamp Thing #26 is a change of course for the series. We now have the Seeder as the Avatar and Alec is part of the Parliament of Trees. It begins with a good overview again about how Alec can only sit back and watch the events unfold. This issues gives a great backstory into the Seeder showing him as a person interested in the Green and only wanting more power once he had a taste when he saved Alec. He used magic and other powers to help him improve the seed gift he was given for helping Alec. While these flashbacks occur the Seeder is also trying to impress the Green now that he is the avatar, he does that by trying to kill the avatar of the Red, Animal Man. When he fails at this he is disappointed with himself and decides to stop the destruction of the rain forests.

The issue did a great job by showing the origin of the seeder both through his prospective as well as Alec’s, which was interesting because he doesn’t have much of an opinion being part of the Parliament. The detail of the art continues to impress but what really stood out this issue was how great the coloring looked as well as the different look of the seeder as the avatar.

Overall, the issue was interesting still having Alec still be a part of the issue, even only if his thoughts were there was great. It gives a whole new meaning that the avatars are always being watched and judged on what they do. The cameo of Buddy was nice but really was not needed. Hopefully Alec’s thoughts continue to stick around until he makes his return.