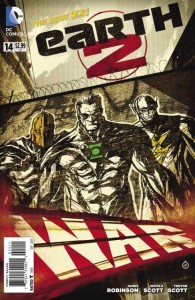 War engulfs Earth 2! The team of new wonders –now consisting of Green Lantern, Doctor Fate and The Flash– decide to take on Steppenwolf ahead of the World Army’s forces in hopes of rallying the world behind them. This book marks an exciting change for the series now that the trio are finally moving the story forward instead of the reverse.

Not much character development in this book but there were a few standout moments. Red Arrow of Earth 2 is revealed and is subsequently mocked by The Flash who refers to him as “Will Scarlett” from Mel Brooks’Â Robin Hood Men in Tights. Disappointingly, there’s very little that distinguishes Red Arrow as Red Arrow (and not another World Army soldier) other than his arrows. Another notable highlight was how well Green Lantern, Flash and Doctor Fate fought as a team. They were more comfortable with using their powers and focused on their own targets without getting in each other’s way. Great improvement in such a short amount of time since they firstÂ obtained their powers.

James Robinson and Nicola Scott are one of the best teams of creators at DC because Earth 2 gets more exciting with every issue. Story pacing remains fluid and natural with plenty of surprises to make readers impatient for the next page turn. Several big panels and two-page scenes will certainly delight readers. This book may even pull in new readers with the amazing cover announcing the coming war.

The “other war” with Steppenwolf in Earth 2 looks to be shaping up into a sturdy alternative to the Trinity War that will soon engulf the DC universe. Hopefully the trio of new wonders can work with the Sandmen to weaken Steppenwolf’s army. With only two issues of Robinson’s run remaining, it should be quite a ride. 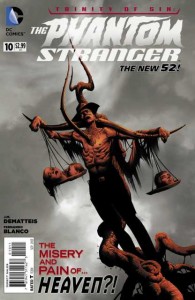 Trinity of Sin: The Phantom Stranger #10

Current events in the DC Universe seem trivial in comparison to The Phantom Stranger’s journey through the afterlife to save the people he loves from their inevitable fates. After escaping Hell, he must travel to Heaven to rescue his family. That’s the easy part. He is only allowed to return to Earth with one and must choose between his wife, son or daughter. Furious, he vows that not even God will stand in his way to bring them all home.

The Phantom Stranger had one thing in mind at the start of this issue: find his family and pull them out of heaven. While it was his fault they died the way they did, his motivation is clearly selfish. In the end, he doesn’t change his mind out of realization of his selfish desire. Instead, he accepts their fate and brings home the babysitter who was collateral damage during the kidnapping. Given his determination to save them over the past few issues, it wasn’t a decision he could easily make. His wife’s heartfelt good-bye and admission of her genuine love for him helped him let go.

Fernando Blanco and Brad Anderson deserve a medal for a beautiful depiction of heaven and hell. Last month’s issue used oranges, reds and blacks to color a hell that was less “fire and brimstone” and more of a personal representation of what hell is for The Phantom Stranger. This issue opens with a stairway to heaven but against the backdrop of an orange sky rising into angelic pink clouds. It’s a beautiful transition between locations and the two stories. J.M. DeMatteis also does another wonderful job not only with telling a beautifully moving story, but in his own depiction of heaven. Described as “the place where time ends,” everyone arrives at a large gate that extends in both directions for forever. They each have a door that leads to their own individual heaven. While readers may have their own personal beliefs about the afterlife, DeMatteis does an admirable job at attempting to represent them all under one unified idea. No other comic in the New 52 universe is navigating this territory.

DeMatteis doesn’t rely on super-powered battles or extravagant traps to tell The Phantom Stranger’s story. There isn’t even an Earth-shattering finale that promises to “shake things up” or “change the status quo”. The Phantom Stranger accepted his family’s fate and must now deal with that loss. It’s a situation that’s entirely relatable to every reader. In the end, this is a character that is more human than many other characters in the New 52. Check out the next issue to find out how Batman, Deadman and Katana pull The Phantom Stranger into the upcoming Trinity War. 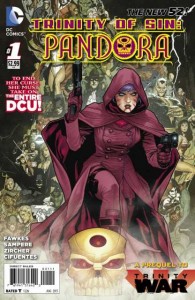 The origin of the most dangerous woman in the DC Universe is finally revealed! Guilty of releasing the Seven Sins unto mankind, Pandora must walk the Earth for all eternity to bear witness to their evil. When she discovers that the key to lifting her curse lies in the very box that caused it, she is willing to fight the entire DC Universe to open it. Ray Fawkes tells a fun story from beginning to end that shows what makes Pandora so dangerous while leading right into the Trinity War.

Pandora’s story begins in prehistoric Macedonia, 8000 B.C.E.. After opening the box and being cursed, she spends centuries trying to fight the sins only to realize the futility of her actions. Instead, she tries to save as many lives as she can from their cruelty. In this way, she manages to discover that she is just not powerful enough to fight the sins and spends all her time from 44 C.E. to present day training to fight in multiple disciplines. This is what makes her the most dangerous woman in the DC Universe.

This book is an excellent example of how talented of a writer Fawkes can be. He sometimes has trouble with smooth dialogue transitions as in Constantine #4, but there were no such issues in this book. Pandora’s origin, her motivation and history are all fluidly explained. More importantly, the tragic consequence of opening the box and then being wrongfully cursed sets her up as a sympathetic character. Readers will soon find out if she is friend or foe in the upcoming Trinity War, but Fawkes certainly made it difficult to classify her as one or the other. Daniel Sampere and Patrick Zircher also do a wonderful job on the art for the book. It brings the excitement in Fawkes writing to life while being on par, if not better than the current art in Trinity of Sin: The Phantom Stranger.

While it’s not explained why Pandora is first seen wearing her long purple robe in prehistoric Macedonia when everyone else in her village is wearing much more primitive clothing, it doesn’t distract from the overall enjoyment of the book. Readers who just finished reading Justice League #21 will enjoy seeing the origin of the Seven Sins. As this book is a direct prequel to the Trinity War, readers who have not already read it will want to before picking up Justice League #22 or Justice League of America #6. Next month, issue #2 of this series picks up in the middle of the war and #3 in the aftermath. There are plenty of reasons to grab the next issues and even more to look forward to.