Oh boy is it a big week for Doctor Strange! He steals the show in this issue and gets a whole annual to himself! It’s been a while since we’ve seen Stephen and this week he helps even the fight with the Illuminati facing off against the Great Society! This issue finally reveals what happens after Stephen offers to sell all of his soul for the power to create and destroy worlds, which would be pretty useful while facing these incursions.

This issue for the most part is one big brawl. I’m okay with 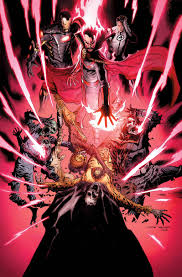 that because it looks absolutely awesome, the artwork is very clean and consistent throughout the issue. The pacing of the issue feels like we are inching towards a resolution and with the last page I think we know which group of heroes might be saving their planet/universe.

I must say that I am really glad Bruce Banner joined the Illuminati; I like his chemistry with the rest of the group. With how smart banner is, and how popular the Hulk has become since Mark Ruffalo portrayed him in The Avengers movie it only makes sense that he would join Marvel’s secret team for really smart people. The only character I’m worried about is Namor because he is a loose cannon and seems to be making everything worse for the group.

I was pretty unfamiliar with Valerio Schiti when he was announced as one of Marvel’s All-New Young Guns at Chicago Comic and Entertainment Expo in April. I liked the preview art they showed for New Avengers when he was announced to be joining Jonathan Hickman on this book. I have been very pleased with him on this series so far! Now I have to go back and check out some of his other work (Journey into Mystery was already on my list because Sif).

Rating: 6 (Out of 7) – Overall this is a really cool issue. I like the art and the story, excited for the conclusion.

Head on over to page 2 for my review of New Avengers Annual #1!