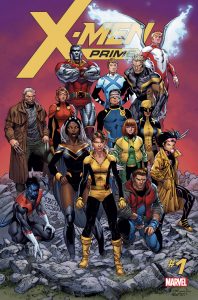 Thanks to X-Men Prime #1, I have hope and anticipation about future X-books for the first time in several years. The book is less of a standalone comic than a thesis statement for the X-Men comics going into the “ResurrXion” relaunch and 2017 as a whole from writers Marc Guggenheim, Greg Pak, and Cullen Bunn. Guggenheim, who is writing the upcoming X-Men Gold series, artist Ken Lashley, and colorist Morry Hollowell, cast Kitty Pryde as a grownup version of the audience POV character she was in her first appearance in 1980. She wants to live a normal life in Chicago, but Storm draws her back in as she becomes the new team leader of the X-Men. The X-Men will no longer be fugitives or revolutionaries, but superheroes.

Guggenheim, Lashley, and Hollowell is low on plot, but is a much needed tone setter for the other stories in X-Men Prime #1 and the X-Men line of comics in general. Because she has been hanging out with the Guardians of the Galaxy for the past year, Kitty provides a fresh perspective on the X-Men’s strength and weaknesses. The result of her findings is similar to the start of Joss Whedon and John Cassaday’s classic run on Astonishing X-Men, but the X-Men are done hiding and beefing with the Inhumans and ready to be heroes under Kitty, Storm, and Magik’s guidance. But, like the best X-Men stories, the tiny character moments are the ones that stick with you like Kitty remarking on how old she feels when she plays with Jubilee’s baby Shogo or looking outside the window and watching some of the X-kids playing sports. Seriously, when was the last time the X-Men played baseball? X-Men Prime returns not just hope to the X-Men franchise, but also relationships and bonding. However, Ken Lashley’s stiff figures, lifeless faces, and failed attempt at homages to classic Kitty Pryde (Hollowell’s colors are partially to blame as he uses the same palette for different eras.) hinders the emotional reunions. Not everything can be perfect, I guess, and his mohawk sporting Storm is quite majestic if guilt stricken.

Along with the frame story of Kitty restarting the X-Men and renewing bonds with old friends like Colossus and Magik, there are two short, intertwining stories in X-Men Prime #1. One is by writer Greg Pak and artist Ibraim Roberson and centers on Lady Deathstrike, who also wants to live a normal life away from killing and mutants. Except it acts as a backdoor pilot for the Pak’s upcoming Weapon X comic featuring government black ops team of “loner” mutants, like Old Man Logan, Sabretooth, Warpath, and Domino. It’s too bad that Roberson isn’t the artist with his lean, tightly inked (Compared to Lashley’s stiffer figures.) art style that captures the pain that Deathstrike feels when she uses her claws or is drafted into service as a killer yet again. Carla, the creepy woman that recruits her, shows flashes of being an excellent antagonist because she initially seems like a kind, almost mothering figure before calling a missile strike on Deathstrike with a wicked, orange gleam in her eyes thanks to colorist Frank D’Armata. 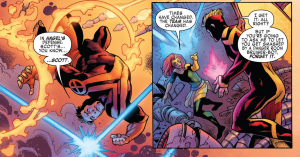 The other sub-story is a setup for X-Men Blue with writer Cullen Bunn nailing the awkward, yet friendly dynamic of the original five X-Men and artists Leonard Kirk and Guillermo Ortego and colorist Michael Garland depicting them in a “classic” X-Men style with bold action poses and bright colors. Bunn spends maybe a little too much time talking (Through young Beast.) about how he doesn’t care about the ramifications of time travel and just wants to tell a soul searching road trip story with them. Jean Grey is their team leader and scolds the boys for wanting to rescue her like they did back when Stan Lee was writing them although they want to save her because she’s integral to the mutant race. It’s nice to have the original X-Men off on their own and not have to fight for panel time with every other mutant character. Kirk and Ortega excel at drawing group shots that aren’t cluttered while Garlands adds some subtler touches like a flame red when Jean appears because you know the Phoenix is going to drop in sooner rather than later. This is definitely the most visually pleasing part of X-Men Prime #1

Even though I’m totally biased because Kitty Pryde is my all-time favorite superhero, X-Men Prime #1 reminded me of why I love the X-Men. Under the watch of Marc Guggenheim, Greg Pak, and Cullen Bunn, it looks like Marvel’s merry mutants will embrace hope and heroism again, and the youngsters and lone wolves of the X-Men will  get interesting stories too.

Overall Rating: 6 (out of 7) – X-Men Prime #1 infuses fresh hope and optimism into the mutant franchise.