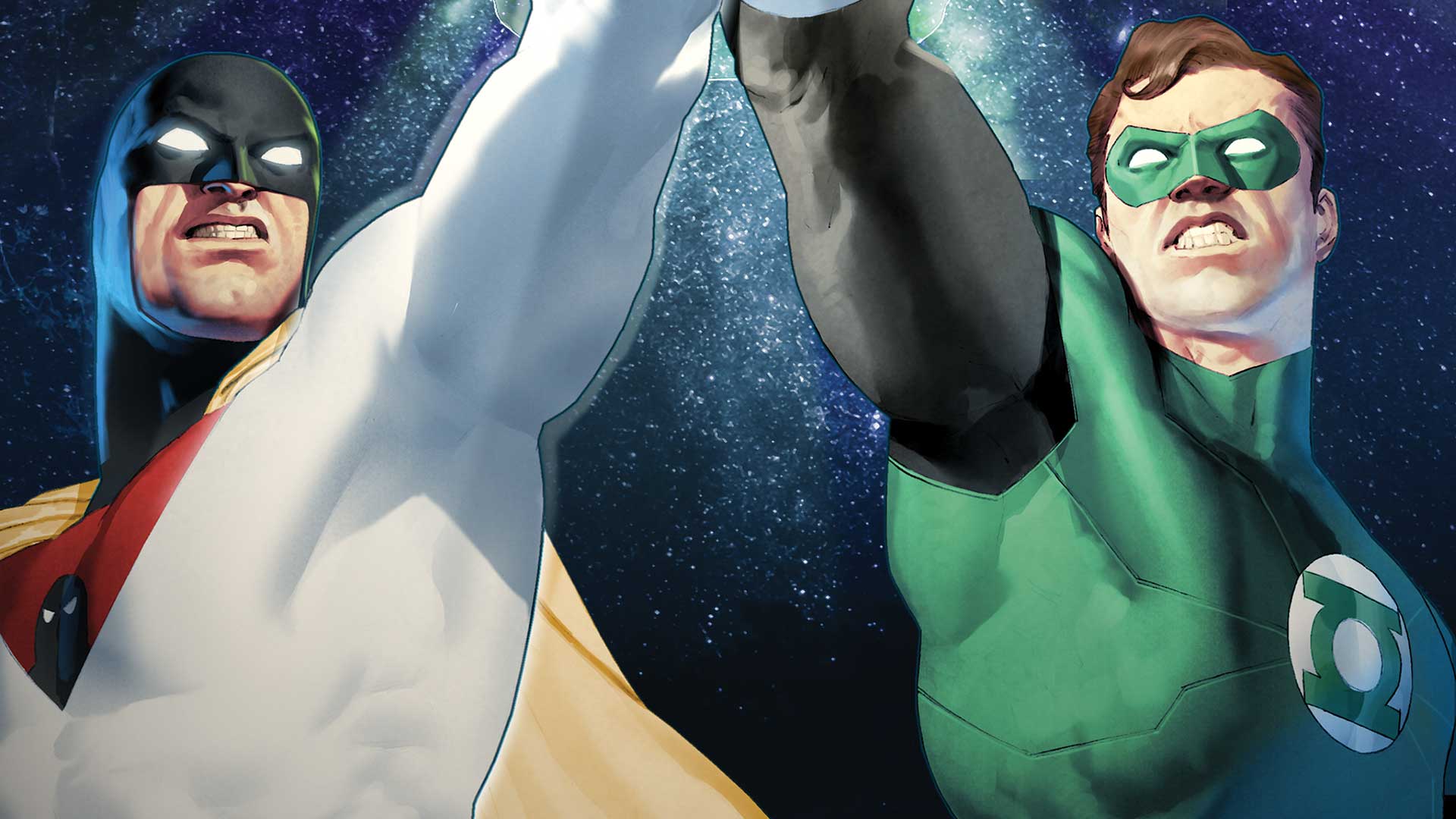 This week, DC Comics is crossing over some of their most famous superheroes with Hanna Barbera cartoon characters. In Green Lantern/Space Ghost Special #1, James Tynion, Christopher Sebela, and Ariel Olivetti team up a pair of jewelry sporting space cops as they investigate the planet Perterra, which supposedly has a weapon that could destroy the universe. Space Ghost and Hal Jordan have a nice repartee with the former’s super seriousness and the latter’s sarcastic jabs. Even though Space Ghost isn’t a talk show host in this comic, Tynion and Sebela pepper his dialogue with wonderful deadpan non sequiturs like on Space Ghost: Coast to Coast.

Green Lantern/Space Ghost Special #1 is like a sci-fi version of Plato’s Allegory of the Cave with two bickering space cops, more energy blasting than negotiations, and mechas.  Its premise is that there is a planet where the tyrannical overlords have told their citizens that they are alone in the universe. There are no other planets, people, or aliens around them. Perterra is so isolationist and xenophobic that the words “vehicle” and “weapon “are synonymous, which supplies the twist of the issue. However, there is a scientist named Mavon, who believes there is more life out in the universe, and just needs a little boost into getting his spaceship off Perterra, which is where Green Lantern and Space Ghost step in.

Tynion, Sebela, and Olivetti don’t just tell a throwaway space shoot ‘em up story in Green Lantern/Space Ghost Special, but use these iconic characters to dig into the nature of truth and how someone can learn about something that they have zero context to describe or talk about. (Except there’s more punching and fly swatter constructs than your usual dialogue by Plato.) Keila, the niece of Mayon, is the viewpoint character and is utterly indoctrinated by the overlords of Perterra that she doesn’t realize the obvious fact that Hal Jordan and Space Ghost are from other realities. When they’re not fighting evil robots (or each other), Hal and Space Ghost gently unpack basically how the universe and justice works for Keila and inspire her to tell her people the truth about the world. It shows the power of superheroes to give people hope and fight for free will and truth albeit in a post-apocalyptic sci-fi setting. 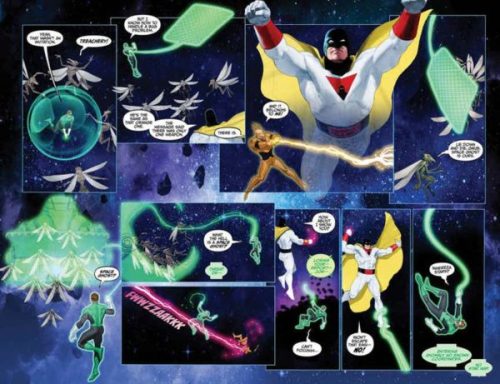 I have mixed feelings about Ariel Olivetti’s art in Green Lantern/Space Ghost Special #1. Hal and Space Ghost are larger than life in this comic, the constructs look cool with deep green shadows, and there is also the gorgeous purple of space that pops up on the first space as Hal is on a mission in another dimension. However, Olivetti isn’t great at depicting any kind of quick motion like during the fight scenes when Space Ghost is using his invisibility or phasing powers. (He has a pretty robust power set for a guy whose arch enemy is an evil grasshopper.) Weapons, technology, vehicle and energy blasts all fare better though this book would have probably worked better with someone whose art style is closer to a Saturday morning cartoon than a Renaissance fresco.

Green Lantern/Space Ghost Special is a pretty nifty space parable meets superpowered buddy cop adventure. The art isn’t the greatest fit, but James Tynion and Christopher Sebela turn in an interesting, yet wordy script that is entertaining, humorous, and will inspire you to tear off your own intellectual shackles and learn more around the world around you. The comic demonstrates that superheroes and philosophy go better than Oreo cookies and chocolate milk, or an episode of Space Ghost Coast to Coast and an early morning hangover.  Also, the next Hanna-Barbera crossover should be Larfleeze/Zorak, who make funny cameos in an early double page spread.