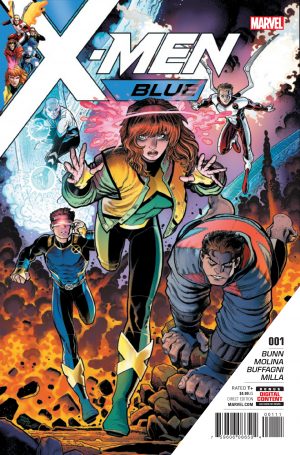 X-Men Blue #1 continues the nostalgia-fest that seems to be the throughline of “ResurrXion” as writer Cullen Bunn, artist Jorge Molina, and colorist Matt Milla take things back to Stan Lee and Jack Kirby’s run on X-Men in the 1960s. They spend the issue fighting the Juggernaut and Black Tom Cassidy like it’s 1965 or 1975 while bickering about whether they should use codenames or not and doing the bidding of a mysterious mentor in a plot twist that immediately changes the tone of the series. Plus there’s an exciting backup story drawn by Matteo Buffagini featuring dead animals, woods, and a clawed mutant that will have X-nerds creating long Twitter threads about his identity.

Bunn’s immature banter for the young X-Men is one part grating and one part charming. Sometimes, it feels like a shtick, and sometimes it feels like these are just young teenagers, who are stressed out about fighting supervillains on the high sea and still getting used to a new team leader. For example, the constant argument about not using their civilian names in battle wears thin after a while, but Cyclops mixing up “hippie” and “hipster” was hilarious and reminds readers  that these teens are from the 1960s. As far as the team lineup is concerned, Jean Grey is the MVP with her clear head for leadership, care about collateral damage, and icy snark setting her apart from her male counterparts, who are all over the place. Milla also uses a cool pink hue for when she uses her telekinetic abilities to battle Black Tom Cassidy and Juggernaut.

Jorge Molina is a solid, if not spectacular superhero artist, who has a Humberto Ramos like tendency to draw his characters with cute manga faces. He’s also not bad at teenage superhero slapstick like when Juggernaut backhands Iceman after the frosty teen tries to defeat him by making him slip on ice like an old Charlie Chaplin routine or almost wrecks the ship after yet another premature celebration.  The young X-Men have quite a ways to go as superheroes even though the cruise guests are grateful for their aid. Molina uses a variety of poses and moves to keep the supervillain battle that takes up most of X-Men Blue’s pages interesting, and his Beast is particularly acrobatic with contorting high kicks. The talking head scenes aren’t as memorable, and this is partially due to the fact that most of the time, the X-Men feel like quip delivery devices and not actual human beings.

Until the final few pages and backup story, X-Men Blue #1 seems like a generic “comedic”  superhero team adventure  book with nostalgic nods at Lee and Kirby and Chris Claremont and Dave Cockrum’s run on X-Men for older fans. But then a spectacular plot twist happens, and the cheesy jokes seem like these time displaced teens attempting to stave off the darkness that they have become a part of for some reason or another.

Overall Rating: 5 (out of 7)-Thin characterization aside, Cullen Bunn and Jorge Molina have potential to do the most interesting thing with the original five X-Men in X-Men Blue #1 since Brian Michael Bendis and Stuart Immonen brought them to the present.