The X-Men need to find Cyclops in order for She-Hulk to read Xavier’s Will and Hank has known where Scott is all along. Once again when Scott thinks he has outsmarted everyone, someone gets the jump on him. Logan’s quip when Hank reveals the location is great. The character interactions in this issue are fantastic and it almost makes me miss having all our favorite mutants living under one roof. This is also the first appearance of the All-New Dazzler and she looks fantastic. She kind of seems like a mix between classic and Ultimate Dazzler. The new look makes sense if you’ve been following this book because you know all the bad stuff Allison Blaire has been through…

When the Original Sin tie ins were first announced, this 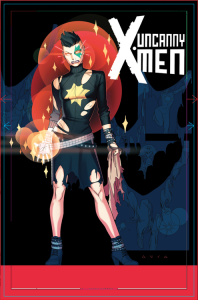 one was the one that interested me the most. I was very excited for the Last Will and Testament of Charles Xavier because he is such an important character to the X-Men especially after his death. Last issue was a little slow while this issue picked up the pace and left you on the edge of your seat! During this issue we get a pretty good reveal and after the set up in this issue, it’s clear the big reveal is coming with the next issue. Are you ready to find out what Charles Xavier’s darkest secret is?

The story with Maria Hill has me very curious especially given the last story arc where the Uncanny X-men took on S.H.I.E.L.D. Who is this guy, what is he (mutant, inhuman, etc.), and why is he important!? I think he is very interesting, but deadly as we’ve seen. So this isn’t going to go very well for S.H.I.E.L.D. and anyone else who attempts to intervene unless he can learn to control his powers. I have really enjoyed all of the new students that Bendis has introduced in this series so I have a feeling that I will probably end up liking Matthew Malloy as well. Bendis is doing a great job with the X-Men, I am extremely glad he made the jump from the Avengers books.

Kris Anka is one of my favorite artists recently and I love the way he draws the X-Ladies. It was nice to see him draw some of the Jean Grey School staff and just not the New Xavier School staff. Anka does a really nice job with such a large cast in this issue and I swear this guy keeps getting better with every issue he puts out! Overall, this was an extremely enjoyable issue. The pacing for the issue is nice and I like that it accomplished more than the last issue.

Rating: 7 (out of 7) – Great issue from a great creative team. I’m ready for the big reveal next issue!