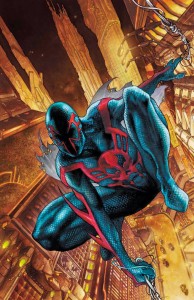 While I am familiar with the character and have read his adventures in the pages of Superior Spider-Man, this was my first proper Spider-Man 2099 issue. He is a character that debuted in 1992, before I started reading comics in the early 2000s, and wasn’t ever someone who caught my eye as a reader because I loved Peter Parker so much. Peter’s my Spider-Man, but this guy seems pretty cool too. And I think he’s starting to grow on me. Miguel seems very smart and funny, much like Peter, so I think I will enjoy the ride.

Peter David is one of those writers that I usually enjoy anything by (especially his X-Factor run, and not just the recent stuff!) This issue was no exception, I though the writing and dialogue was great. The main characters were established and the recap page perfectly summarizes why the Spider-Man from 2099 is here in 2014 for anyone just jumping on to this book without any prior knowledge of the character.

I thought the story was engaging, to me it makes sense for someone to come from the future to remove Miguel from the timeline because he is an anomaly. He doesn’t belong here and it may be disastrous for our future the longer he stays here. I also like that it looks like Liz Allen is going to play a big role in this title, it helps ground it in Peter Parker’s world instead of some random person from the future running around with no implications. My only question is when will Peter show up in the book and will he ever be able to help Miguel return to the year 2099?

I thought the art on the issue was just okay. It was not bad by any means, it just didn’t wow me. Sliney did draw some pretty cool Spider-Man acrobatic action shots though. This is a book I was really looking forward to since I enjoyed Miguel’s story in the pages of Superior Spider-Man and I enjoyed how everything played out in this issue. I am looking forward to where this series is going.

Rating: 5 (Out of 7) – Great writing with an engaging story and characters although the art wasn’t anything special. Overall, I am looking forward to where this series is going.