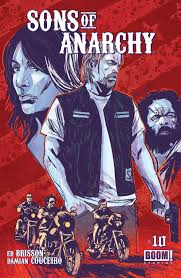 Sons of Anarchy is one of my favorite shows ever. It is extremely addicting and has some of the most awesome characters on television. When this series was first announced, I was thrilled. A six issue mini-series featuring my favorite motorcycle club? Sign me up! And you can only imagine how stoked I was when this series was announced as ongoing. And to be honest I think each issue gets better and better.

This series is nice because it helps hold me over while we wait for the final season to start and this arc explores a period where the show jumped ahead and this is what we did not get to see on television. This arc takes place after season 3 while Jax, Bobby, Clay, and Tig are locked up in Stockton, which in the show was 14 months. That is a lot of time to explore the clubs dealings both in and out of prison and especially their quest for survival.

The art for this book is great. The characters look awesome from screen to page and you never have to do a double try and figure out which characters are which. That really helps make this series accessible for fans of the show if they want to delve deeper into the Sons of Anarchy world that creator Kurt Sutter has created. The comic is also as vulgar and violent as the show so I felt right at home reading it. The writer does a great job with the characterizations, the way they talk, what they say, how they act. It all genuinely feels like the characters from the show. I was worried how close they would be because I don’t know how involved Kurt Sutter is in the creative process for this book if he is at all.

The thing I enjoy most about this issue is that we get to see some faces that are no longer with us in the show. And it’s nice that even though they are deceased in the show, they can still be interesting characters in the comic book. If you’re a fan of the show and not checking this book out, I highly recommend it. If you haven’t seen the show, that also is worth checking out (it’s on Netflix!) and sorry for the mild spoilers.

Rating 6 (out of 7) – Great story and art. This series is definitely making the wait for the final season bearable.