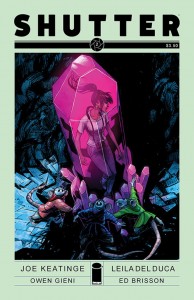 This certainly seems to be a wonderful time to read comics. I can’t remember any time when there has been a plethora of such original and creative stories to read every week. And there’s literally something new to check out every single week. Is this a new age of modern comics? Could we be living in the midst of a sequential renaissance? I have no idea, I just like comics, but things sure seem really great for fans of the medium right now.

This week’s fresh selection is Shutter #2. In keeping with the current state of the industry, this book brings another highly imaginative and unexpected story to the table. Shutter tells us the tale of Kate Kristopher, once the young companion of her adventuring father, followed the famliy tradition of world spanning adventures until the mysterious events of his death forced her to settle down. The end of issue #1 left us with Kate being under attach by ghosts, Pinocchio like feline beasts and robots claiming to offer protection from her other siblings. It was a wild ride to say the least.

This issue loses no steam in continuing the story right where it left off, as Kate tries to escape all three factions, regardless of any of their intentions. She manages to escape and while recovering from her injuries incurred during the fray recalls questioning her father about possible brothers and sisters, a conversation which he deftly sidesteps. Later we join our beastly attackers in prison, witness a prison guard sneeze uncontrollably until a giant dragon busts out of his head and begins a jail break. It appears Kate does have some siblings out there and they don’t appear to be friendly.

Even though we’re only two issues in, Shutter is a book that can make your head spin with all its implications. There’s a LOT going on and alluded to in the back story. It’s a huge scope as well. Not only do we have world/dimension spanning adventures, familial intrigue, alien/robot/spectral battles, but we have an Earth that appears to have been heavily transformed after contact with the various civilizations the Kristophers have encountered. It’s a lot to take in, but after a read or two it’s all very fun to process. Keatinge seems to have a massive plan in place for this book and I’m very much looking forward to what he has in store.

The art is also a treat. Del Duca’s art reminds me of a funky Scottie Young/Fiona Staples mash-up. It might sound weird but it totally works. She takes the fantastical and meshes it with the real world backdrops seamlessly, with creative creature designs and dizzyingly complex fight scenes. As a result you may have to go back and examine a panel a few times to really get the gist of what’s going down but it’s all very nicely crafted. Gieni’s colors are vibrant, and in some places make me feel like that first moment when the Wizard of Oz went from black and white to saturated color. It’s like you’re seeing some of these palates for the first time. To get technical about it; I likey.

Image is definitely on a roll lately with their original offerings. Even though they advertise the book as a mix of Fables meets Y: The Last Man, I could say Shutter is just as much a product of the success of Saga, Black Science, and Manhattan Projects. Which is a compliment. I’m wondering if the explosion of great new stories will come to an end soon, or if this recent proliferation will burn out as these books fight for an audience. I hope there’s room for everyone at this party, because it’s a great time for comic lovers to sample a little bit of everything and find that it all tastes pretty damn great.

Score: 6 (out of 7) My family vacations were never dimension spanning adventures or weekend trips to the moon. We did drive to the Grand Canyon once. Yeah, I got nothing.