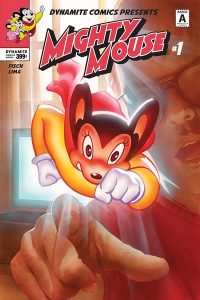 Sholly Fisch, Igor Lima and Pete Pantazis breathe new life into Mighty Mouse, the dusty, old superhero parody cartoon that Ralph Bakshi had a thing for. Mighty Mouse #1 has pinch of self-awareness, a touch of metafiction, and huge helping of the power of escapist fiction. And yeah, there’s a mouse puffing up his chest and punching a highly derivative rogues gallery. But the comic is really about a lonely kid named Joey, who gets picked on because he’s into art and not being a loudmouthed jerk, and how watching old Mighty Mouse reruns makes his days a little brighter.

After a highly animated, opening splash page, the art style in Mighty Mouse #1. Igor Lima is more Darick Robertson and less Alex Toth, Max Fleischer, or insert any great Golden Age animator/cartoonist here. His raw, photorealistic, yet expressive style makes the reality of Joey’s life sink in. It flat out sucks. He can’t even draw superheroes on the playground without getting his butt kicked, and the principal/authority figure at his school isn’t much help either. In the parts when he’s at school and or walking down the city streets, Lima isolates Joey in the panel.

However, when he’s writing his self-insert Mighty Mouse fan comics, Joey  is front and center as he helps his rodent hero defeat the bullies and score a victory for the side ofgood. Igor Lima and Pete Pantazis seamlessly shift from lifeless, yet intense “real world” to the bright nostalgia of the Mighty Mouse cartoons that Joey watches home alone and finally an in-between world of rough pencil sketches and swiped poses as he writes himself into Mighty Mouse’s adventures. It’s a tour de force in cartooning and plays with reality while telling a straightforward narrative of a lonely kid and a heroic mouse. It seems like Joey is picked on for his size so he gravitates to a tiny mouse that happens to have the power set of Superman. 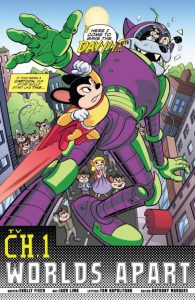 Even though he is clearly obsessed with Mighty Mouse the way I was with Lord of the Rings and the works of J.R.R. Tolkien and C.S. Lewis, Joey doesn’t have an idealistic, naïve view of the world. His self-awareness makes him that much more endearing like when he tells the TV “Shyeah, right” after yet another episode of Mighty Mouse results in a hairbreadth escape and a victory for the little guy. Joey understands that Mighty Mouse is formulaic as hell, but he finds happiness in these simple, power stories of good triumphing over evil. It’s a simple pleasure in a world that is out to get him. Sure, superhero stories can be a little repetitive, but they are great fun and at their best can be inspirational and morally uplifting. (Aka the reason I saw Wonder Woman in theaters twice in three days.)

Mighty Mouse #1 is a highly relatable story to anyone who has been pushed around or bullied and found comfort in superhero stories, old cartoons, or escapist fiction in general with a predictable, yet status quo demolishing twist. Sholly Fisch, Igor Lima, and Pete Pantazis switch modes from bright cartoon idealism to harsh reality with ease and grace, and it’s worth checking out even if you have no idea of Mighty Mouse’s place in the pop culture pantheon like yours truly.

Overall Rating: 6 (out of 7)– Mighty Mouse #1 is a stellar reimagining of an ancient cartoon character that taps into superheroes’ inspirational nature while not shying away from the crappiness of reality.