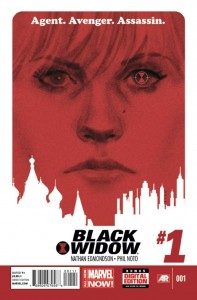 Today, we have before us Black Widow #1. Again. There’s been quite a few Black Widow #1’s out there in the world. Most of them were pretty decent, but for one reason or another never lasted for very long. It’s my great hope that this particular Black Widow sticks around a while. Tells us a few tales, lets us get close to Natasha. Well, as close as she’ll let us anyway.

I actually enjoyed the last Black Widow series, circa 2010. It only lasted 8 issues, and I felt like it didn’t really get its legs until Duane Swierczynski took the reins and really cranked up the intrigue and action I expected from this character. Alas, it must not have caught on and the title was scrapped. But here we are again, with a new series, new creators and the same Black Widow. Only this time she’s got a few movies under her belt, some nice exposure thanks to Scarlett Johansson, and hopefully a few more folks will want to learn about our favorite red-headed spy.

Issue #1 gets right to it. The don’t mess around too much with introducing exactly who Black Widow is and why she’s doing it, so instead we jump right into the work she’s doing now outside of the Avengers and gain a tiny glimpse into her motivations. She’s basically working as an agent for hire in her spare time, taking clandestine jobs for pay and using the funds to build up some trust accounts she’s set up. All we know about her current motivations is that she’s trying to atone for something done in the past. It’s vague yet believable, and we have the foundation for at least the first arc laid before us.

Edmondson’s script is paced like a big budget action film. Every panel is filled with motion, anticipation of a fight and the promise of a punched face, while the internal dialog driving every page neither distracts nor slows the pace at all. I like that he doesn’t give us yet another origin story or a long winded explanation of Natasha and who she is or what she does. We just see her kicking ass, telling us as much as we need to know without killing us, and moving onto the next scene. It’s perfect. And Phil Noto. What do I say about this guy? I think he produces approximately 137 pages and covers a month and they’re all drop dead gorgeous. I seriously have no idea how he does it. The thing I love the most about Noto is you get the bare minimum visual input needed to tell you what’s going on so nothing distracts you from the story. Rendering every window and carpet strand is impressive but Noto says screw all that and just tells the damn story with the most important elements in every panel. And the majority of them end up looking like fine art in the end. I could probably buy a Noto book with no lettering and still know exactly what’s going on. Plus it would be so pretty.

Marvel’s track record for books with a female lead has been less than stellar lately. Despite having a stable of strong female characters I can’t think of a single MU character that has had a title with the longevity of, say, Wonder Woman or Supergirl. Or even Batgirl or Harley Quinn. Ms. Marvel was the only thing close and her books have been rebooted a few times in the past five years. So, needless to say, I’m rooting for Black Widow to break the trend and give Marvel a great high profile female lead that both men and women can enjoy. That’s why Noto will be perfect for this book, he doesn’t over-sexualize his women, so she’ll stand on her character and accomplishments rather than her T&A. I think this book is off to a great start and can’t wait to see where Natasha takes us.

Score: 6 (out of 7) The scene where Natasha breaks a few arms with “Snap, Crackle, Pop” sound effects made me sooooo hungry for breakfast. 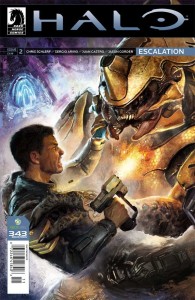 I’ve played Halo a time or two before. My daughter has Halo 3 on her Xbox and that’s probably the outer most reaches of my experience with the game. I understand there is a story and it’s quite decent as far as video game stories go. But, I’ve always been apprehensive when games make the jump to comics. They’re usually one of two things: overblown advertisements for the game and horribly executed, or overblown advertisements for the game that actually add something to the overall experience. Somehow, Halo: Escalation has managed to fall smack dab in the middle.

Perhaps it’s because I’m not fully immersed in the world of Halo and was never super hardcore into the games, but there sure seems to be a ton of factions, races, and characters with purposely weird names in this book. So many that I stopped paying attention to their names and ranks and affiliations and was able to enjoy the book a bit more. I’d love to give you a summary of the story, but frankly I got a little lost what with the blue aliens plotting with the yellow ones, while the military looking guys seemed to be caught in the middle and then the lady and bald dude getting all shooty.

I’m sure if you’re a Halo veteran and know this story like the back of your Warthog, then this all makes sense. To a new-ish reader like myself the story was just a slow slog through names and places and betrayals that didn’t make a whole lot of sense. In a way, it reminded me of Star Wars: Episode I The Phantom Menace. A bunch of nonsense political stuff bracketed around a few decent action scenes. That’s not necessarily a good comparison if you’re keeping score at home.

Score: 3 (out of 7) A bonus point was given for nothing bearing any resemblance to Jar Jar Binks in this issue.