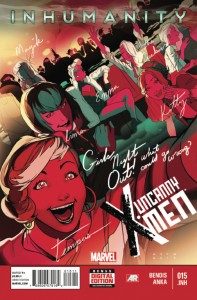 Hello class. Today we’ll be reviewing Uncanny X-Men, Volume 3, issue #15.INH. Not to be confused with those other Marvel books that are numbered either .UA, .AI, .NOW, .INF or .DUH. There will be a quiz afterwards, so please do pay attention, hmm?

I really love issues like we have right here with Uncanny X-Men #15.INH (sorry, it really is a ridiculous numbering system, yet Marvel thinks it’s so clever.) Although technically a tie-in issue with the upcoming Inhumanity event, it’s a pretty great stand alone book as well. And it serves as a much needed break from the Cyclops/Wolverine standoffs we’ve been subjected to nearly every issue since AvX.

This issue finds the female members of our Uncanny X-Men undertaking the most dangerous mission of all: a shopping day. The entire gang (Illyana, Emma, Jean, Kitty, Eva, Celeste, Irma and Phoebe) decide they’ve had enough of being hunted like dogs and wearing the same clothes since like, forever, and take a quick teleport to Piccadilly Square for a day of shopping and eating. Just like how the normal people do it! Of course, nothing ever goes as planned for our X-Men and a newly hatched Inhuman emerges in the middle of London. Our ladies attempt to diffuse the situation, because that’s what good X-Men do, and quickly discover the effects of Black Bolt’s Terragin bomb are going to be very difficult to deal with.

One reason I love issues like this one, where our heroes are able to take a break and try to live like the other half lives, is that they remind me of the old Claremont Uncanny books where you’d open it up and find the X-Men playing baseball, or going sledding, or doing any number of things that were actually pretty ridiculous for superheroes to be doing but still added a much needed element of humanity for everyone involved. I really liked that Emma could put aside her feelings about young Jean Grey and just dip into her big bag o’ cash and take the gang shopping. I liked that Illyana could lose the crazy head dress and Soulsword for an evening (even though she still went out on the town with well placed chopsticks in her hair), or that the Stepford Cuckoos can turn off the creepy long enough to have a cheeseburger. These one-off, take a break from the fighting and spandex issues are just plain fun, and in a way it’s sort of sad today’s X-Men can’t show this side more often.

Despite the stupid numbering sequence on this issue, I heartily recommend it to any X-Fan that doesn’t mind a break from Slim vs Logan and the unending hatred towards mutants. It’s also a decent setup for Inhumanity as it relates to the X-Men. I especially liked the last two panels, where it’s possibly foreshadowed that the Inhuman explosion just might take some attention off of our weary mutants for a spell. We shall see…

Score: 6 (out of 7) One does not simply travel into the past for training by the Sorcerer Supreme Doctor Strange and then fall asleep. 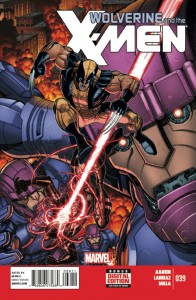 I’ll be honest. I’ve kind of had it with Wolverine. The old “I’m a killer but I’m better than Cyke, I’m a headmaster now!” schtick is really tired. He’s in bed with every superteam in the MU, his powers barely work yet he still gets shot and cut and eviscerated every other issue, he kills everything in sight yet he’s supposed to be a role model for young mutants. HOWEVER! Wolverine & the X-Men is consistently fun, witty, suspenseful and action packed despite having it’s contents sullied by Headmaster Logan.

Ok ok, I’m being pretty harsh on the ol’ Canuck, and to be fair he’s a very solid anchor for a pretty damn good book. The beauty of this title is that even when the main story is derailed to accommodate event tie-ins, it never loses sight of where it’s going and keeps trudging along through some very good long-form storytelling.

This issue picks right up on the heels of the fall of the new Hellfire Club and dives straight into the next arc, following a pair new mutants who are secretly fakes planted last issue by S.H.I.E.L.D. But first we get a very quick and concise recap of every student currently at the school, presented in the guise of a typical day in the life at the Jean Grey School for Higher Learning. Each student has endless potential and a hidden dark side, and this is exactly what our spies are tasked to exploit. The second thread in this story continues with Logan and Cyclops looking to spring the trap S.H.I.E.L.D. left for them at the Sentinel storage facilities. Now, I know it’s pretty shady for a world peace keeping organization to be stockpiling mutant killing robots, but honestly after AvX I really can’t blame them. However this is a deal-breaker for our X-Men so they knowingly rush into the trap just to blow up some Sentinels. And it wouldn’t be a Wolvering book without Scott/Logan “my ideals are better than yours” banter. Meh.

Overall this is a really fun issue with just a touch of discord as we learn about the spy’s intentions and the secrets they’ve already uncovered. Aaron’s scripts are always perfectly paced and his dialogue witty and sharp. I’ve especially enjoyed his evolution of Broo and how he’s made me consistently root for this lovable ugly little flesh eating alien. Laraz is relatively new to this title, but he’s already killing it filling in for the incredible Nick Bradshaw. I remember Laraz’s work from The Mighty Thor and was impressed by him then. Personally I feel if he can keep up the pace he deserves his own monthly title. He’d be great on X-Men, which I think is sorely missing Jorge Molina’s talents.

I’ve heard this title will end with issue #42. Knowing that, I’m very curious to know how Aaron will wrap up this arc with Mystique-Dazzler still obviously deep into her plan of destroying the X-Men via S.H.I.E.L.D. We also know Wolverine will be getting another new series soon as well, so perhaps with his powers damaged his headmaster days are coming to an end as well. I’ve been with this book from the beginning and have immensely enjoyed the ride, even if Logan makes me grumpy.

Score: 5 (out of 7) Am I the only one that wants to see Eye Boy get his own mini-series?