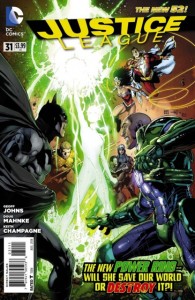 The Justice League is the frog to Lex Luthor’s scorpion. Continuing the exciting aftermath of Forever Evil, the Justice League searches for Power Ring’s ring to help them learn more about what destroyed Earth 3. Oh, and Geoff Johns delivers one hell of a juicy confrontation between Batman and Lex Luthor.

We were left hanging at the end of Justice League #30 when Lex Luthor arrives at Bruce Wayne’s doorstep and asks to speak to Batman. It’s such a surprising thing that is hard to imagine ever happening. Of all people to discover Batman’s identity it’s Lex Luthor, Superman’s most deadliest adversary. So when you see it on the page (and after pinching yourself to check if you’re dreaming), you just KNOW whatever happens next is going to be flippin’ amazing. Johns does not disappoint. The confrontation between Batman and Lex Luthor was well executed. These are both very intelligent men and the scene plays out like a game of chess without the pawns. It moves hard, fast and there’s an inevitable checkmate.

While the obvious highlight of this book was the Lex and Batman confrontation, we were finally, formally introduced to the new Power Ring. Her costume was certainly cool. Looked much newer and brighter than the previous Power Ring’s. As Jessica Cruz interacts with the ring, you start to get a sense of how difficult her journey to becoming a Green Lantern is going to be. This is not something that is going to happen right away but I’m diggin’ it. Plus, who better to introduce the first female Green Lantern than Geoff Johns?

So much of this book was enjoyable that it’s hard to pick out favorite moments. Everything from Captain Cold getting hired to continue being a superhero to Shazam finally using his magic to conjure a ping pong table made me smile. Definitely pick up this book if you haven’t already because Johns is doing some wonderful stuff and you won’t want to miss it.