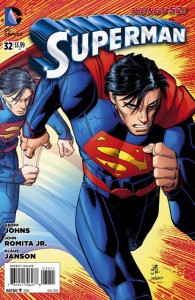 The ‘Man of Steel’ isn’t the only “super” man. Geoff Johns returns to Superman with a story that is surprisingly a reverse origin. A quiet evening at home leads Superman into a battle against a mysterious space ship. Despite a familiar premise, Johns infuses much needed humanity into Superman.

Beyond the Donner Superman and the recent Man of Steel films, Superman has failed to capture my attention. He’s powerful, but there never seemed to be much humanity beneath his cape. Since the launch of the New 52, I never saw a compelling reason to care about him as a human. He’s just a symbol. With a single issue, Geoff Johns accomplishes what several creators couldn’t. Didn’t take much effort either. Seeing Clark Kent spend a normal evening at home was a brilliant way to show his humanity because it’s something we can relate to. With Batman, it’s easy to relate to him because we know he’s just a man in a suit. Mostly what we see of Superman is him flying and punching things. So it’s wonderful to finally get to see him do stuff that’s so mundane.

Bringing John Romita Jr. onto this book was a perfect choice. There’s a round, smoothness to Romita’s style that brings out the humanity in the characters he draws. It’s perfect for this book because Johns seems to be interested in telling more of a Clark Kent than a Superman story. When Clark finally changes into his suit it’s a powerful moment because he still looks like a man.

I had a wonderful time reading this book. While I read most of Superman’s New 52 run so far, it’s not a title I’ve been excited or anxious to read. For the most part, I kept checking in on it because it’s Superman so “it’s suppose to be good”. He’s one of DC’s tentpole heroes but no one seemed to “get it right”. Thus far, all the creators have been neglecting to show the character’s humanity. Thankfully, Johns gets it. Looks like we’re finally getting a version of Superman that we can actually care about.