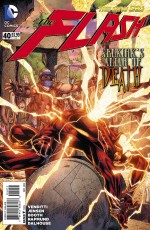 The epic, action packed conclusion that Mr. Venditti and Mr. Jensen have been building toward is finally here. Future Barry is on a dark path, that has led to the killing or severe injury to majority of the villains that have escaped his capture over the years. Meanwhile, current Barry is stuck in the Speed Force. After some intense moments, with future Barry realizing what he has become, present Barry is able to escape the Speed Force, but without someone else following him out. Selkirk battles both Barry’s who decide to settle their differences to overcome the odds. Barry is successful in sending Selkirk back to the Speed Force, but Future Barry is injured. This is where we learn that Selkirk has been working for someone else. Professor Zoom finally makes his New 52 debut.

There was a lot that happened in this issue, and at times it felt a but rushed, but it did have a very exciting ending that should allow for a lot of drama going forward with this series. This series has become a sci-fi, action comic and has improved with this creative team. This issue could have benefitted from an oversized issue to allow more time to build up the final pages. With so much going on the art managed to impress especially during the action scenes. Since the New 52 relaunch, the Flash has continued to be one of the best comics in terms of art.

Overall, The Flash #40 was a fitting end to this story. A lot happened, which at times felt a bit overwhelming, and there was a big shock at the end. Fans of the series will be eager for the next issue, but we will have to wait two months for that to happen.  If you have been following this series it is a must read, but if you haven’t the issue will be out of place for you. The future for the Flash looks to be very interesting, if the DC Universe stays intact.