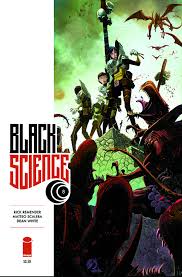 This is a series that I saw at my local comic shop and caught my eye yet I neglected to pick up with each issue that came out. That was a huge mistake on my part. I picked up the trade collecting the first 6 issues of this series on a whim and fell in love with this world that Rick Remender and Matteo Scalera have created. I loved every page of it; it’s visually appealing and very unpredictable, what more could you ask for!

I love the first part of this issue that was narrated by Nate, it just felt so relatable. I mean, I’ve never had a similar experience growing up being bullied like that but we have all been in a situation where we feel powerless like he did. It is some nice character development and the rest of the issue we see more of the fallout from Grant’s death. I wasn’t sure how engaged I would be with this series after his death because it felt like it was his story, but I am enjoying the way things are going down and the new group dynamics. These characters feel so real and that’s one of the biggest things that drew me into this series.

I love the art for this book; Scalera’s artwork style is fantastic. This guy is everywhere; I swear I’ve picked up Marvel, DC, and Image stuff with this guy’s art over the past few months. He must keep pretty busy and it doesn’t take away from the quality. It especially fits the tone of this story and he can draw these characters with such emotion.

The writing is fantastic. I love this world Rick Remender has created. He is telling very real stories with a science fiction spin on them. I just love the direction this series is taking; Remender does such a good job writing these characters and the dynamics between them. Each character is so unique and the way that play off each other is great.

Rating: 6 (Out of 7) – Great issue; one of my favorite series on shelves right now. If you’re not reading this, you should be.