One of the many new releases by Image this week was a new series titled Low by Rick Remender and Greg Tocchini.  This is not their first rodeo, however.  If you recall, this is also the team that worked on Last Days of American Crime.  They had been planning for a while to work together again, and this is what we got. 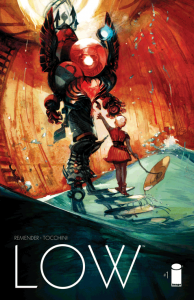 Low is interesting in that Rick Remender was very much stating how it was important to tackle something in science fiction that none of us have seen before, and that the idea that Remender and Tocchini came up with is very much something that we’ve seen before.  Post-Apocalypse distant future with a sun that is expanding and making life uninhabitable on the surface so people are having to live underwater.  The underwater part is a somewhat different take, but Image green-lighting a post-apocalypse book is beginning to seem like something they have scheduled for on a daily basis.  Sure, the Superhero genre is over-saturated, but maybe we can ease it up a little on the apocalypse?  Please?

Does that mean this book isn’t good?  Not necessarily.  Plenty of great works are derivative.  However, I’m not entirely sure I’m sold yet.  I’m a sci fi buff for sure, so the book has me as far as that goes.  And Rick Remender is currently working on Deadly Class which is absolutely amazing and is a huge reason as to why I picked up Low in the first place.  So why am I not blown away by this book too?

The pacing.  This book is incredibly dry when compared to Deadly Class and some of Remender’s other work.  Even though Tocchini does a great job delivering some gorgeous art, it doesn’t help the pacing of the book.  Most big comics now have a one-two punch out of necessity as the market is bigger than ever and you really need to stand out in the pack to get people picking up #2.  In this #1, the beginning is slow, filled with jargon that comes off as clunky at times instead of moving the story forward.  When I think of good uses of jargon, I think of things like Blade Runner. “I’ve got four skin jobs walking the streets …” You want something that sounds interesting that you immediately understand from the context.  I didn’t feel that here.  This is a fairly simple, straight forward futuristic world as far as the set up; the jargon bits should be less clunky.

Towards the end of the issue we get some action, but it’s heavily foreshadowed early on and already have an idea of how it’s going to go.  Again, sometimes that stuff works great.  For me, it wasn’t clicking.  Perhaps some people will find it refreshing that the book takes it’s time and let’s itself breathe in the first issue, but it wasn’t really working that way for me with this title.  I can totally get into dry material, or slow paced material (and I often do.  I read quite a bit of Golden Age and slice of life comics), but it has to be compelling in some way.

Score 4 (out of 7) – This book is very well put together and the art is fantastic, but I feel like this is a book that missed it’s mark with the first issue.  It may really pick up from here, but I’ll need some convincing to pick it up.