Why do I mention all of this? Well as usual, I tend to ramble before I get to a point, but more importantly it is to establish a baseline for my love of comic book based cartoons, but also the huge expectations I put on them.

Iron Man: Armored Adventures is an interesting show as far as build-up go. As far as I can remember, I never heard of the show when it was in production nor when it began to air. I only discovered the show one day while channel-surfing. The show looked interesting enough to me that when the first season became available on Netflix, I checked it out. And I will say, it was quite a mixed bag for me.

The first thing you’ll notice with the show is the art-style. The show is CG-animated, but seems to combine it with hand-drawing art-work or at least it comes off that way. Most of the time, the show just seems too inconsistent for me where some scenes seem to rely on CG-way too Â much, while others seem to animate slightly differently. And animation being a big part of… well a cartoon.. it really did hurt the overall enjoyment of the show for me.

The next thing you’ll notice (or first depending on how big of an Iron man fan you are) is that this show features a younger cast. Yes, Tony Stark, Rhodey and Pepper Potts are re-imagined as teenagers in the series. After the death of his father, Tony moves in with Rhodey and his family, and both attend high school along with Pepper Potts and later on Gene Khan (The Mandarin). In addition, Tony’s company, Starks Enterprises, is being ran by Obadiah Stane, since Tony isn’t legally old enough to take over after his father’s’ death.

The show’s premise takes some getting use to, but by now viewers should be accustomed to these new takes on characters. We’ve had X-men Evolution and Batman Beyond just in recent memories. The change in the characters and their ages didn’t really bother me too much. Sure, you don’t get the whole Tony Stark fight with alcohol, but there’s always season 2! 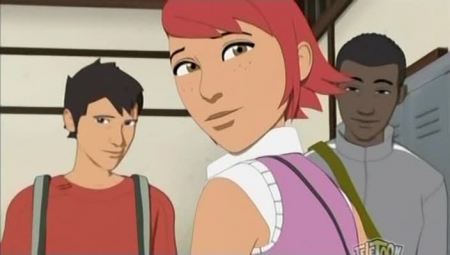 Speaking of fighting, Tony as Iron Man takes on all manner of creatures in the series. From the Iron Monger to The Living Laser to MODOK, there are a ton of classic Iron Man enemies in the series. In addition to that, the bulk of the show is carried by the conflict between Tony and Stane and of course Tony’s search for the 5 Mandarin rings. The show does a pretty good job of weaving the fabric of its story and characters throughout the season. And creates some truly tense scenes and moments that pay-off in the season finale.

The voice work in the show is pretty good as well. No real voices stood out as great performances, but nothing grated on my ears so much that I wanted to punch the characters!

Finally, I much touch on the show’s theme song. I really really dig it. Traditionally, it seems like DC goes for a more instrumental and epic feel for their show’s themes (Batman, Superman, Batman Beyond, Justice League, The Batman, etc), where as Marvel goes more for a catchy, lyrical driven theme song (Spider-man, Spec Spider-man, Avengers Earth’s Mightiest Heroes,etc). This theme fits firmly in the Marvel camp as its filled with a rocking beat and some pretty fun lyrics. I catch myself humming it way too often.

As a whole, Iron Man: Armored Adventures is a mixed bag of a cartoon. While, the show has its moments, it really does nothing above and beyond the call for the series. The characters remain relatively flat throughout the season, and some moments just have me pulling my hair out that characters should notice other motives faster. As I said at the beginning though, the art style is the biggest distraction for me though. It just stood out too much, and noticing it as much as I did it just doesn’t work.

Recommendation: Channel Surfer/Netflix: Television shows are a tough thing to recommend. I mean for the most part they are free (if you have a TV and/or cable) and really are only expanding your time. So while I’ll recommend checking out the show, I would only do so if it happens to be on or you watch the first season via Netflix like I did. Word is that a second season for the show is in the works, but not much is known about it.