Say Anything, Community, and the Creative Process.

The newest album by the band Say Anything,Â Anarchy, My Dear, is in some respects a return to form. The last album, a 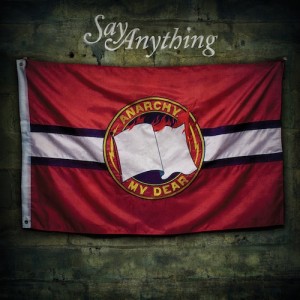 self-titled effort, was viewed by many (including your humble writer) as a poor attempt at relevance, with its over reliance on more dancey aspects and lackluster songwriting all around. The thing is, we’d come to expect more from Max Bemis and company, especially after the fire-breathing blast ofÂ …Is A Real BoyÂ and the ambitious bombast ofÂ In Defense of the Genre. The last album just seemed too… safe, too boring. The newest one feels more of a piece with the two earlier ones, both musically and thematically. There is literally a sequel to the closing track ofÂ IARB, “Admit It!”, titled “Admit It, Again”. So it was obviously on the mind of Max Bemis while he was writing.Â But there is a deeper level to the disappointment with the self-titled as well, one that goes beyond style and content, and has to do with the circumstances of its creation, and one that bears examination with respect to the newest release.

Max Bemis’ struggles with mental illness and addiction are well-documented around the internet, so I don’t need to rehash them here. A simple google search or wikipedia browse will suffice for that. Needless to say, the creation of bothÂ IARBÂ andÂ IDOTGÂ were shrouded in a cloud of dementia, paranoia, drugs and alcohol. Fans and critics have both attributed the success of such to those circumstances, to the point of blaming the lackluster follow-up on the lack of stress and problems in Max’s life.Â Since his publicized problems, he’s cleaned up, gotten on his meds, and gotten married, and to all appearances is healthy and well in both body and mind. Yet, fans begrudge him of this. They want him miserable and paranoid, because to them that means good music. The same idea is applied to the songwriter for Brand New, Jesse Lacey, where people assume he has to be miserable to write, hence the long periods between albums for the band. It’s a fair question to ask, really, as “pain” and “Art” have always been linked in the public mind. “Starving artist”, “bleed for your art”, “art is hard”, etc. But can an artist create something worthwhile without pain? 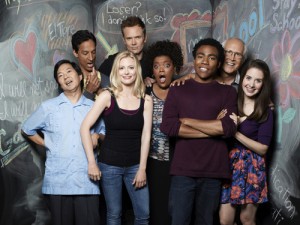 Dan Harmon, the creator and show runner of NBC’s (currently on hiatus)Â CommunityÂ is another example of this phenomena. He is a very open person when it comes to his process, his fears, his worries, his retreats. Active on twitter and (to a less extent) tumblr, there is a constant glimpse into his mind available at any moment, and it does not paint a pretty picture. He seems constantly anxious, depressed, constantly drinking, and obsessed with the aspects of his show that might not always be within his control. In interviews, he is self-deprecating to a fault, and in-depth glimpses into the process by which the show is written show him as super controlling and almost Aspergian in his attention to detail. But, it can be said, all this results in a show that is absolute genius. How much of this can be attributed to the other? Is the show good because he is miserable, or are they unrelated variables? One could easily wager that should Harmon’s demons ever vanish, he would be more satisfied with less, and stop striving for the heights that he constantly reaches for, and inÂ CommunityÂ achieves. But who can really say?

And that’s the main question, really. Does art lead to pain, or does pain lead to art? Your humble writer has experience as a songwriter, and I can say that I’ve brought my own issues to the fore in service to it. On the same note, though, I’ve also written songs that are completely from nothing, with no basis in my reality, but still have an element of truth to them. Some of my best songs have been the former, and others the latter. Some of my worst too. Art can come from pain, but pain does not necessarily lead to art.

And this brings it back around to Say Anything andÂ Anarchy, My Dear. It’s a good album, decent, though not up the standards ofÂ IARB. It feels like a condensed version ofÂ IDOTG, to be honest, with a similar feel in the songwriting, and a similar bent to genre-hop. Overall, it’s good, and fans of the band will be happy with it. But one can’t help but wonder: where does Max Bemis go from here? One hopes he is happy, and doesn’t relapse in any significant fashion. I don’t think he has anotherÂ …Is A Real BoyÂ style explosion in him, but he doesn’t need to. That was done by a different person. And this current one is good enough.

Anarchy, My DearÂ will be released digitally and in cd form March 13th, 2012.