The A-Z of Geek Cinema: V is for Videodrome 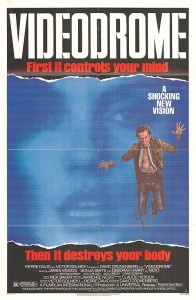 David Cronenberg’s scifi/horror film Videodrome plays in the fields he often did early in his career: body horror, flesh mechanics, the external reflecting the internal. But in Videodrome, he did so with a larger purpose: the idea of the media becoming the message. Influenced by Marshall McLuhan, who was a lecturer at the Universty of Toronto when Cronenberg was a student there, the film posits that there is a place for sex and violence in art, in culture, and, more sinisterly, that what we’re watching might not be as important as how we’re watching it.

James Woods plays Max Renn, the president of a Toronto UHF channel, one which specializes in programming of a more explicit nature. Sex, violence, sadomasochistic play, that type of thing. Always on the lookout for the “next thing”, his tech shows him a pirated signal for something called Videodrome, which appears to be almost a snuff film. Simultaneously repulsed and fascinated, Max seeks to find the originator of the films/show, but gets much more than he bargained for in the process…

The idea that there is something effecting us when we watch television, something subliminal, is not anything new. Pretty much since the medium’s inception, people have decried it as the devil. “Kill Your Television”, as the slogan goes. (I have that on a t-shirt.) Videodrome goes one farther and says that the signal is not only effecting us mentally, but that the signal will transform us. We will transcend the old flesh, the everyday humanity, and become new. Creatures of the electric age, both man and machine. The New Flesh. 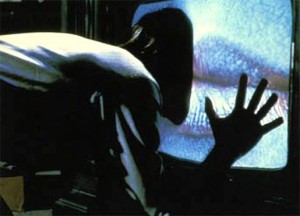 Except, it also tells us that this is bullshit. The film, quite deftly in fact, has its cake and eats it too. Renn becomes a puppet of both the Cathode Ray Mission (headed by Brian O’Blivion, a McLuhan stand-in) and the Spectacular Optical Corporation, headed by Barry Convex. (Ok, the names are a bit on the nose, but I think they’re great..) O’Blivion, in fact, has been dead for a while, existing only as a vast series of video recordings he made. He appears on television talk shows as an image on a screen, to be displayed on a screen. (Incidentally, McLuhan once said he would only appear on television under the same circumstances.) Convex wishes to take the Videodrome signal public, turning everyone watching TV into the New Flesh. O’Blivion resisted, hence why he had to go.

Through many machinations and plot twists, you end up with James Woods having an open gaping hole in his chest, into which he inserts a gun, in an almost sex-like act (SYMBOLISM!), and also video cassettes, through which he receives “orders” from both Convex and eventually O’Blivion’s daughter. Both use him as an assassin of sorts, and in the end of it, while hiding, he is convinced by a hallucination(?) of a television that in order to weaken the hold Videodrome has over him, he has to ascend and leave the old flesh. The TV shows him an image of him shooting himself in the head with his cancer gun, causing the TV to explode and shoot out human organs. (Oh, did I mention? He eventually retrieves his gun out of himself, but it then grows INTO his hand. Yes.) Renn repeats what he just saw, beat for beat. And the film ends. 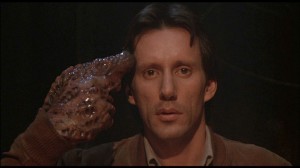 But what does it MEAN? Like I said, the idea of television being bad for you is nothing new, but Cronenberg isn’t entirely saying. It almost seems like he thinks of television (and I would suppose video, internet, and films) as weaponized. And in a way, they are. Ideas, thoughts, dreams, all come through the screen and infest our subconscious, in a way that some might think of as insidious, but can also be a force for good. Cronenberg seems to be saying that, while sex and violence have their place in art and culture, that there is a point when they become the harbingers of far worse.

The control television and film can have over people’s lives is a strong one. As it evolves, so we too must evolve. Death to Videodrome. Long live the New Flesh.