The A-Z of Geek Cinema: T is for the Third Man 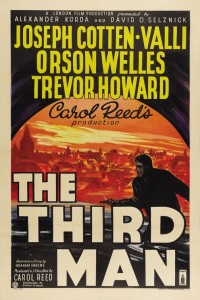 Music in film is important. It can define a mood. It can provide counterpoint. It can even, in the case of musicals, provide plot. At its best, a film’s score enhances the rest of the film to an extent that without it, the film would be lesser. Imagine Star Wars without John Williams’ soaring fanfare, The Lord of the Rings without Howard Shore’s overlapping themes, Edward Scissorhands without Danny Elfman’s quirky musicalizations. And, ignoring the hyperbole of the following statement, there is probably no film in the history of cinema that has a more appropriate and perfect score than the one Anton Karas did for Carol Reed’s classic noir, The Third Man.

How Karas came to be involved in the film is well-known legend at this point in cinema circles: he was performing zither in a beer garden in Vienna, when Reed heard him and approached him about doing the score for the film. Reed had been looking for something unusual, something to reflect the character of post-World War II Vienna. Typical film scores at the time were heavily orchestrated, and the obvious choice was a waltz, but Reed felt that would betray the feel of the story. He brought Karas to England and spent over six weeks with him working on the score. The main theme (also called “The Harry Lime theme”) was based on a melody from a practice book Karas used.

Strangely enough, the full score was able to be released when the film came out, but record labels were not interested, focusing instead on the main theme and putting it out as a single. It actually spent 11 weeks at number one on the Billboard chart in the US. It directly lead to more film themes being released as singles (and is therefore responsible the James Bond title themes, the theme from Chariots of Fire, and “Kiss from a Rose.” So: you’re welcome.)

What makes this amazing is how unusual the score actually is. The zither is an instrument mostly found in the Baltic & alpine Europe cultures. Similar to a hammered dulcimer, it is played in much the same way a lap steel guitar would be, sitting down with the instrument across your lap. It has a jangly sound, almost melancholy, fitting the mood that Reed hoped to permeate the film with. In fact, the sound has become synonymous with the film, to the point that it was often used as a shorthand in parody and comedy sketches to imply war or spy themes. 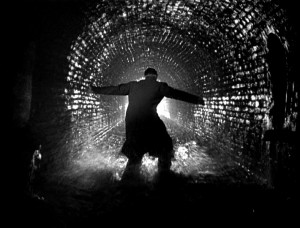 The film itself is a masterwork of noir cinema. Expressionistic cinematography, combined with the unusual score and the quite frankly amazing performances of the cast, not to mention the unique setting of Vienna, in some strange alchemical fashion. Not enough, honestly, can be said about the cast. Joseph Cotten plays Holly Martins as a broken hero who falls and just keeps falling, and Orson Welles, in an amazing turn as Harry Lime, manages to cast a shadow over the whole film while only appearing in a handful of scenes towards the end and ostensibly being DEAD most of the time!

And all of this would be for naught if the score was different. It can be assumed that, yes, with an ordinary for the time film score, it would still have had the same script, same actors, same setting, same everything. But Karas’ work on the zither added another dimension, that extra element of cynical melancholy, that brought out the full quality of the setting, and brought the picture together into a cohesive whole. Just listen for yourself.