The A-Z of Geek Cinema: U is for Unbreakable 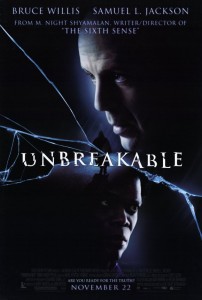 An exercise in stillness, but within the genre of the superhero action film, M. Night Shymalan’s 2000 film Unbreakable is a strange amalgam of his own stylistic quirks with the demands of the chosen genre. Made right before Shymalan descended into his own massive ego black hole, it shows a director confident in his abilities, with a strong idea, but maybe without a clear idea of how far to go with it.

Hot on the heels of the massive success of The Sixth Sense, Shymalan again cast Bruce Willis as his lead, this time playing “David Dunn” (double consonant name!), a listless and existentially drifting man who, after being the sole survivor of a horrific train accident, discovers that he is unable to be hurt, and has much more than normal human strength. Urged on by his son, he develops a sort of empathic ESP, and eventually starts to believe that he might be the superhero his son thinks he is. Unfortunately, the film is hamstrung by both Shymalan’s insistence on a “twist” ending, though one which is telegraphed at almost every step, and by the sheer lack of plot.

On the first count, the reveal of Samuel L. Jackson’s “Mister Glass” as an opposite number to Dunn is pretty obvious from the moment he says what his childhood nickname was. Shot primarily through windows, or in reflection, Shymalan plays fair and doesn’t attempt to obfuscate the issue, but conversely he goes to far, essentially putting a giant arrow point at Elijah Price that screams “I AM YOUR ARCHVILLAIN.” I’m surprised there wasn’t a Guild of Calamitous Intent application hanging on a clipboard anywhere. 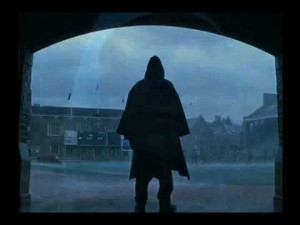 The sheer lack of plot momentum, or really any plot at all, is a bigger issue, I feel. The film is essentially the first act of a story. Shymalan has said in interviews that it was intended to be the first part of a trilogy, though that seems like an unlikely prospect at this time. It shows very baldly, as the entire film is a set-up for Dunn to be a superhero going forward. Imagine if an entire Spider-Man film was about Parker in high school and then ended with him getting bitten by the spider; it’d be somewhat interesting, but ultimately a narrative failure. For as big a disciple of Spielberg as Shymalan claims to be, he seems to have missed the important lesson of movement and momentum that even the lesser of Spielberg’s work exhibits.

The very stillness and quiet that served well in The Sixth Sense makes for an interesting juxtaposition with the ideas inherent in a superhero genre film, but in practice it presents as staid and a touch boring. Shymalan course corrects this a bit in his next film, Signs, but that film has a whole other list of massive problems to it. The very end of the film, with the Mister Glass reveal, followed by a text card explaining what happened next, felt like the biggest let down. If you’re going to introduce an antagonist for your hero, especially with the intent to continue the story in the future, you don’t end the film saying “And then the bad guy got caught and put away forever. The End.”

You can see the seeds of Shymalan’s downfall here, in both his flaws as a writer and in his growing ego (casting himself in a role of increasing importance in every film.) While not nearly as bad as it eventually got (oh god, The Last Airbender), Unbreakable feels more like a good idea executed half-assedly, and a massive missed opportunity.