The A-Z of Geek Cinema: O is for Orphan 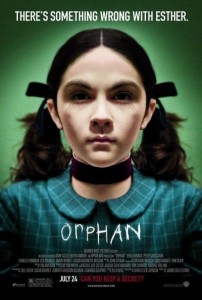 Everyone loves a twist ending. You’re sitting in a theatre, following a plot, saying “Oh, I know where this is going,” when BAM, out of nowhere, a complete left turn, a swerve, something unexpected. And maybe, if it’s the good kind of twist, it makes you rethink your perception of the rest of the film, to the point that you have to go back and watch it again, to look for the clues, see if maybe this new revelation colors how you see the other plot points. The bad kind of twist is there solely to shock, to make you go “Wait, WHAT?” but it doesn’t hold up when scrutinized. The good kind makes the rest of the movie better. 2009’s Orphan is not a great film, but it is certainly one with a good twist, one which the whole film is built around.

WARNING: There WILL be spoilers about quite a few films coming up. Look at the tags to see what films are mentioned, and decide accordingly if you wish to proceed. YOU HAVE BEEN WARNED.

So, Orphan. Not that great a film, at first glance. In fact, it seems your run-of-the-mill “evil kid” horror movie, with some interesting subtext about losing a child and how that can affect a person’s psyche. Then, the twist comes: the adopted child, Esther, is not a child at all. She’s actually a 33-year old psychotically violent woman named Leena Klammer, afflicted with hypopituitarism, and thusly, with the help of makeup, false teeth, and body wrapping, appears to be a 9 year old girl. While not completely out of left field (there are some indications in the film that something is off about her), this is not a possibility hinted at in the adverts or trailers for the film, or really in most of the film proper at all. It is a HUGE twist, really. The audience thinks its getting an “evil kid” film, like The Good Son or The Omen, and it’s actually something crazier. Does it break the film? No, I feel it enhances it. Your mileage may vary of course.

It resembles most closely the twists in such films as Fight Club, and The Sixth Sense, in that it makes you want to watch the film again with the newly acquired knowledge, and thus look for “clues”. In The Sixth Sense, the twist (Bruce Willis was dead the whole time!) is a huge gotcha moment, but one which is supported by the film itself. It holds up on rewatch, though doesn’t really say anything interesting about the character or themes of the film. It is a Twilight Zone episode writ large. Whereas the twist in Fight Club (Ed Norton & Brad Pitt are the same dude!) plays into the themes of the film of powerlessness and identity; “Jack” feels no worth or power in his life, so he unconsciously creates a version of himself who is all self-worth and power. 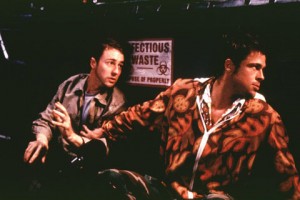 CItizen Kane has a similar twist, one which everyone and their mother knows by now. (“Rosebud”, CFK’s final words, refer to his beloved childhood sled.) Much has been said both on how this reveal both is and isn’t important. It’s true, “Rosebud” is just a MacGuffin used to kickstart the story and get to the real important things, about Kane’s past and his rise and fall. But it is also a perfect symbol of the futility of his life; he acquired and used and acquired and acquired, things and buildings and money and people, and he was not satisfied. He died, lonely and alone, in his decayed Xanadu, wishing only for his lost childhood. This does not change perceptions of the previous film, but it adds to one’s understanding, and provides an almost circular structure to the film.

There is a flip side to twist filmmaking as well, where the twist is unbelieveable and in fact can damage what was otherwise a decent film. The French film Haute Tension, (released in the US as High Tension) is one such example. For most of its run time, it’s a perfect example of the modern horror thriller, super violent, with rising (yes) tension through out. Until the end, when it’s revealed the killer is actually one of the main characters, who we’ve been following the whole film. A series of scenes are shown with her killing the various characters. What this ultimately means is what the audience has been shown the whole movie is in fact not the “truth”, that it was all an elaborate ruse, not on the characters, but on the audience themselves. This in and of itself is not a bad thing, but the aforementioned twist in fact doesn’t make any sense. It is a twist just to be a twist. M. Night Shymalan has been guilty of such things himself, seemingly learning the wrong lessons from the success of The Sixth Sense.

So what can we learn from such things? That a twist in and itself is not an inherently bad thing. It can be a useful device in film and storytelling in general. But it should not be a means in and of itself. It should benefit the story, not just be something you throw in because you couldn’t think of an ending.

By the way, I suppose I should tell you now that I’m actually a werewolf and this is all a computer simulation being played out by dolphin-shaped aliens in the future. Also: there’s a bear. WHAT A TWIST.