The A-Z of Geek Cinema: K is for Kick-Ass 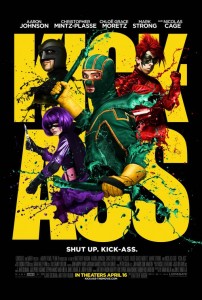 So I’m honestly not sure I can write anything about this film. It was over-the-top, violent, and seriously INSANE.

I’ve read the book, and I quite honestly hated it. There was a vile racist undercurrent to the whole thing, and it seemed like Mark Millar laughing at his audience rather than with them; he seemed to be saying all his fans were closet racist homophobes who do nothing but masturbate and dream of violence. And the ultimate “origin” of Big Daddy and Hit Girl might have seemed clever when he first wrote it, but it ended up seeming trite and “gotcha!” in a really stupid way. And the movie… the movie got rid of all the stuff I disliked about the book, and added bazookas, butterfly knives, and a jetpack!

The fight scenes were all well-paced, interestingly choreographed, and incredibly shot, especially the one that was mostly in pitch black. Also great was the score, which was uniformly excellent, both in the choices of songs for some of the scenes, and in the score itself, which quoted other superhero films to great effect. And I can’t go by without mentioning the cast: Aaron Johnson and Chloe Moretz were both great, but Nicolas Cage stole this film, both with his overexuberant affectations in his civilian guise, and in his CLEARLY Adam West inspired speech patterns.

The subtextual themes of the film come in and out without thought or warning, really. It starts out seeming like it’s going to be a straight-forward look at what a “super vigilante” would be in our world, but it doesn’t really keep that going. It just sort of… abandons this idea at one point and instead trades it in for batshit insanity. Which I am not complaining about, mind you. I like crazy ridiculousness in an action film as much as the next guy. I wonder how much of this was due to the above-mentioned vile source material getting darker and harder as it went along, and the filmmaker’s just compensated by going with “fun” instead of “edgy”. 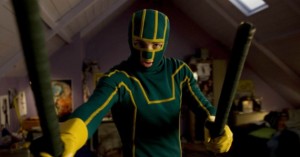 In any event, it’s a fun film, and a sequel is forthcoming (from a different writer and director, I believe), which I will be very interested in seeing. I haven’t read the second mini-series from Millar, because I don’t read ANYTHING by Millar anymore. So hopefully it’s good.

By the way, the two best jokes in the film: A) That a lot of people still used Myspace, and B) “Now Showing: The Spirit 3”.