The A-Z of Geek Cinema: E is for Equilibrium 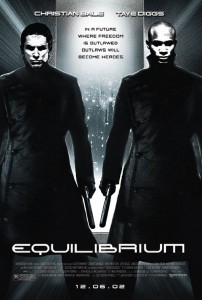 The ability to feel, to have emotions, is one of the things that makes a person human. Without it, one is just a robotic sociopath. Take away feelings, and what do we have left? With a basic premise predicated on a removal of all feelings and emotions, 2002’s Equilibrium asks that question, and while it doesn’t really do much with the idea beyond its surface level, it does it stylishly and with a lot of violence.

Written and directed by Kurt Wimmer and starring Christian Bale (pre-Batman), the film shows a future society which, following World War III, outlawed emotion and all artifacts thereof. A mass-marketed and mandatory drug keeps the populace’s emotions and feelings tamped down and shut away, and the law is enforced by Grammaton Clerics, who practice a form of martial art called Gun Kata. They are basically zen gun ninjas, using positioning and precise technique to maximize damage and mayhem while minimizing return fire and personal injury. Bale is one such Cleric, one of the best actually (as you’d expect; they’re not going to center such a movie on the worst one, right?), and the film follows him through a crisis of non-emotion and the road away from it.

I’d seen this before. In fact, I’d seen it multiple times, and enjoyed it. But for some reason this time, I was less dazzled by the purposely spartan production design and gun kata action choreography, and paid more attention to the actual plot. It dawned on me about halfway through that the central premise of the film doesn’t make sense on one level, and is maddeningly inconsistent in another. If you take away emotions, then that should include all emotions, right? Like pride, anger, jealousy, ambition, fear, everything. Yet characters in the film (one who are shown to definitely be on the drug still) show emotions. Just because they’re not laughing, or crying, or seething, does not mean the emotion is clearly shown through their actions and dialogue. Taye Diggs is one, he smiles constantly, and is shown to be very much ambitious. None of that should be possible in the world the film establishes.

Conversely, when Bale comes off the meds, he is shown reveling in a sunset, is shown pointedly removing his gloves in order to run his hands along surfaces and objects, and has a moment where he seems almost catatonically ecstatic when smelling a ribbon. The drug is said to remove emotions, yet this seems to imply it removes all feeling, including those of necessary senses. How can a society run with a populace dulling or removing all their actual senses? It seems improbable, much less impossible. 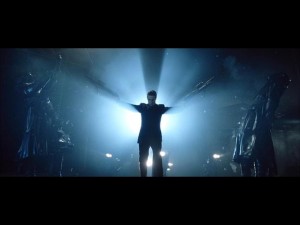 The removal of emotions makes sense when seeing the Grammaton Clerics in action, as they can remain calm and focused in combat, but a lack of sense feeling would seem to be a detriment to the very actions they’re undertaking. It makes no sense. The villain’s ultimate plan is equally nonsensical as well, as it implies the plot of the film has been arranged beforehand, when the action that starts everything rolling, Bale’s character missing a dose of his drug, is entirely accidental and his own fault.

The look of the film is halfway between interesting and cheap, to be honest. I like the spare and sparse decor of the future they’re representing, as it fits with the artifact-less society it posits. But for every interesting shot choice or set piece, there’s one that’s boring or full of poorly rendered effects. And while the idea of gun kata is cool, and in some cases is pulled off in a very interesting fashion, a lot of the time it just seems to be “like the lobby scene from The Matrix, but more measured.” So there’s this weird sense of “I’ve seen this before” to much of it.

Equilibrium isn’t a bad film. It isn’t a great one though. There’s a lot to like in it, but there’s just so much dumb quasi-meaningful ideas in it that I can’t help but roll my eyes. It tries so hard to be “cool”, and occasionally gets there, but much of it reaches perfunctory and “just there.” At least, that’s what I feel.